ATLANTA – Team USA, the current and back-to-back World Cup Power Soccer champions, will play exhibition games at Medtrade, on Nov 1, in Atlanta. Players will be introduced in the morning at the “Washington Update” session hosted by AAHomecare, where United States Rep Tom Price (R-Ga) has been invited to speak. Two full exhibition games, one in the morning and one in the afternoon, will be played on the show floor.

Team USA is in training for next year’s World Cup in Kissimmee, Florida. Hosted by the United States Power Soccer Association (USPSA), this will be the highest level tournament ever played in the U.S. The two previous World Cups were held in France and Japan respectively, both won by Team USA. 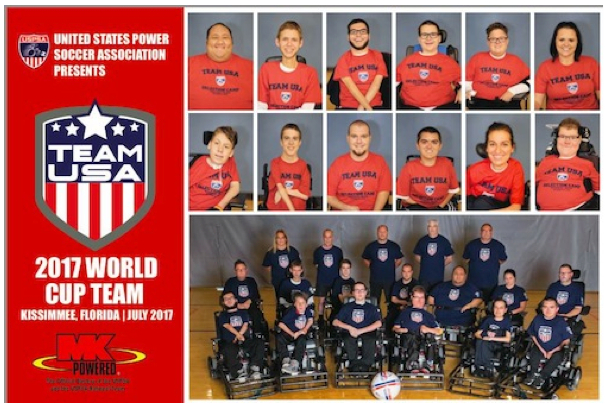 “Local teams played exhibition games at Medtrade two years ago,” said Wayne Merdinger, executive vice president and general manager of MK Battery, the primary sponsor and official battery of the USPSA and Team USA. “But the level of play and skill from this world-class Power Soccer team will shock the exhibit hall this year.”

Power Soccer is the only team sport in the world created exclusively for power wheelchair users. It is played in 27 countries and governed by the Fédération Internationale of Powerchair Football Association (FIPFA). There are multiple leagues and about 60 teams in the U.S., governed by USPSA. Efforts are underway to qualify for inclusion in the Paralympics in the future.

“Power Soccer is an expensive sport, especially for traveling to regional and international competitions,” admits Merdinger. “Transporting competition-level wheelchairs, and other specialized equipment for both the personal needs of players and for the games are big issues for the athletes, families, and the USPSA, a not-for-profit organization. They require personal attendants, staff, referees, facilities, and other costs typically associated with major sporting events. We encourage other corporations and individuals to step up and sponsor this worthy sport, especially for the tax deductible costs associated with the upcoming World Cup tournament next year in Florida.”

Learn more about sponsorship opportunities with Power Soccer in the USA by visiting http://fipfaworldcup.org/

The game is usually played in a gymnasium on a regulation basketball court. Two teams of four players attack, defend, and spin-kick a 13-inch soccer ball in a skilled and challenging game similar to able-bodied soccer. “When two local teams played two years ago, it was exciting and impressive,” says Kevin Gaffney, group show director, Medtrade. “This time, we have the best team in the United States, and the world for that matter, playing at Medtrade. I encourage Medtrade attendees to check it out this year.”

MK Battery (Booth #1527 at Medtrade) has been the main sponsor for United States Power Soccer for many years, and that is still the case. Medtrade is scheduled for Oct 31-Nov 3, 2016, at the Georgia World Congress Center in Atlanta.

Early registration for Medtrade, the nation’s premiere HME trade show, is in full swing. The show will once again be held in its familiar home at the Georgia World Congress Center in Atlanta, from Oct 31-Nov 3, 2016.

“If you are looking to save money, it pays to act now,” says Gaffney. “You can save up to $75 on the Expo, and more than $200 on the Conference over later rates and/or day-of-show rates. Whether you are a regular attendee, or considering your first trip, remember that demand for HME will continue to skyrocket, and Medtrade can help providers succeed with relevant education and exhibitors.”