Medtrade $5,000 Giveaway is On – Attendees Must Get Cards Stamped at Five Booths

Medtrade $5,000 Giveaway is On – Attendees Must Get Cards Stamped at Five Booths

ATLANTA – Last year’s Medtrade concluded with Kevin Gaffney, group show director, cranking the handle of a golden tumbler filled with entry cards in the show’s first-ever $5,000 giveaway. The new closing reception and cash giveaway injected a shot of energy to the final day, and it’s back at Medtrade 2018. 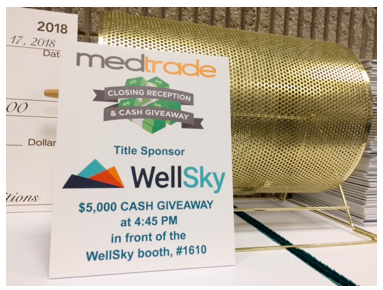 With title sponsor WellSky, presenting sponsors PPM Fulfillment, AAHomecare, and Independence Medical—and additional support from EvenUp, the closing reception is designed to encourage providers to stick around for additional networking, plus a chance to win some cash.

“To qualify for the $5,000, attendees receive game cards that must be stamped by five different exhibitors,” said Gaffney. “Attendees [not exhibitors] must then drop their cards into a bin by 4:40 p.m. on Wednesday, the final day, and we will pull the winner just a few minutes after that. We are still finalizing the process for 2018, but it may be something similar. Stay tuned for more information in Medtrade Monday.”

The Closing Reception & Cash Giveaway takes place at 4:45 p.m. on Wednesday, Oct 17, in front of the WellSky Booth #1610 at the Georgia World Congress Center.

It’s hard to know exactly how many people stuck around last year specifically for a chance to win money, but it’s clear that more than a few exhibitors benefited from the new format. “We were getting qualified leads an hour before the show floor was scheduled to close, which is unusual,” said Kolby Wegener, MBA, PMC-II, marketing specialist, WellSky, at the 2017 Medtrade. “People wanted full-on demos one hour before closing. The cash giveaway helped.”