ATLANTA – Sheldon (Shelly) Prial has been to all but one Medtrade, and the 88-year-old HME legend has decided to make this year’s show his last. As Medtrade Ambassador for many years, Prial and his wife Thelma have come to represent the sense of community that Medtrade is all about.

“Shelly knows the business and advocacy sides of HME and pharmacy better than anyone,” says Kevin Gaffney, group show director, Medtrade. “Shelly is the quintessential Medtrade ambassador, and he can’t be replaced. I have always said that if all HME providers were like Shelly, there would be no competitive bidding. Members of Congress simply could not withstand an army of Shellys.” 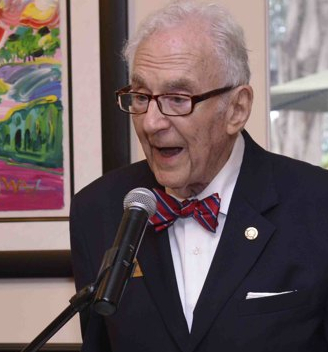 Spend a little time with Shelly and you’ll find a humble man who simply does what he believes is right. For example, when describing his initial attempt to enlist for WW II, he says: “I didn’t like what the Nazis were doing to the Jews—I’m Jewish, by the way…I enlisted and the Army turned me down because I could only see out of one eye. I volunteered again and I took the test with my right eye twice.”

Almost 70 years later, Shelly still talks of the eye test deception with a measure of guilt. The fib eventually led him overseas where he was assigned to be a demolition man in the 252 Combat Engineers. “This required me to work with sticks of dynamite,” he remembers, “and I am by nature rather clumsy.”

Just 20 years old when he got out of the Army, he went back to school, eventually earning his Bachelor of Science degree and becoming a Registered Pharmacist in 1950. A year before graduation (1949), Shelly reluctantly agreed to go to a party that would change his life.

“My best friend invited me and I said, ‘No, I’m working tomorrow and Sunday,’” muses Shelly. “One of the reasons he invited me was because I had a green 1940 Buick Convertible with red leather seats. I finally said yes, so we went in my vehicle to this party. That’s when I met Thelma, who’s sorority was there.

“I said, ‘Let’s stay a little later and help clean up,” continues Shelly. “When we got back, I said, ‘Stanley, I’m marrying Thelma.’ He told me I was out of my mind, and I said, ‘No, I’m serious.’ We got married eight months later.”

On July 2, 2015, Shelly and Thelma (both New York natives) will celebrate 65 years of marriage. “Nobody in this whole world has ever had a better spouse than I,” says Shelly. “She and I have been one person for all of these years. With our children, we always worked together. When I built my pharmacies, she was there all the time. It was never me alone, or her alone.”

There is so much more to tell. Keep checking Medtrade Monday for Shelly Prial, Part 2.

Update: Read part 2 and part 3 of this story.