WATERLOO, IA – Last week, I offered some thoughts and analysis relative to the July 1 phase-in of the lower regional and rural payments based on recent bid rounds.  I commented that, as of July 1, the industry is incurring a “double whammy” of a 50% or more cut in the non-bid areas (compared to the 2015 fee schedule), and, for HME providers servicing the 117 competitive bidding areas (CBAs), a continued overall deterioration in reimbursement. 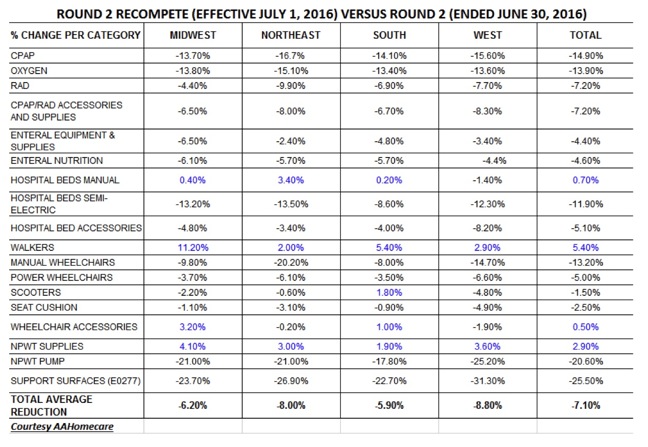 As I mentioned last week, the Affordable Care Act mandates the continued use of DMEPOS competitive bidding payment amounts to determine future Medicare fee schedules.  This means future rounds (both Round 1 2017 and Round 2 recompete end December 31, 2018, allowing for a single “competition” in 2019 and beyond) will determine the reimbursement for bid items in the approximately one-half of the U.S. population not residing in bid areas.

And, much to the to the consternation of the industry, those HME companies bidding in 2019 (and effectively creating the future fee schedule for the non-bid areas) are obliged, under the current statute, to bid below the Medicare fee schedule.

First of all, in S.2736 (introduced Sens. John Thune (R-S.D.) and Heidi Heitkamp (D-N.D.), the bipartisan, budget-neutral bill would replace the bid ceiling for future rounds of bidding with the unadjusted fee service rates from Jan. 1, 2015, rather than the limit noted above.

And, on June 24, CMS published a proposed rule (CMS-1651-P) that is an annual update to the End-Stage Renal Disease (ESRD) bundled payment system but also included proposed changes to the competitive bidding program…including the bid ceiling issue. CMS seemed to recognize that, under the current statute, the bid limits would be subject to a continuing downward spiral…eventually reaching zero.

What does that mean?  Regardless of the success of implementing the Senate bill (coupled with H.R. 5210, the amended House bill), this rule would allow the bid limits to be based on the 2015 fee schedule amounts – think $180.92 monthly oxygen reimbursement – and ostensibly in time for the 2019 combined program.
Readers should note that this proposal also includes additional improvements (in my opinion) to the program including:

Bid Surety Bond Requirement.  CMS proposes to implement a Medicare Access and CHIP Reauthorization Act of 2015 (MACRA) provision requiring bidding entities to submit proof of an authorized “bid surety bond” for each CBA in which a supplier is bidding. The surety bond amount would be set at $100,000 for each CBA associated with the bid. If the bidder is offered a contract for any product category in the CBA, and the supplier’s bid for the product category was at or below the median composite bid rate used to calculate the SPAs, the bid bond would be forfeited and CMS would collect on the bond if the supplier does not accept the contract. In all other cases, the bid bond would be returned to the bidder within 90 days of CMS’s public announcement of the contract suppliers for the CBA. This provision is intended to prevent suppliers from submitting – but not accepting — “low-ball” bids that artificially drive down prices to improve the supplier’s chances of being offered a contract.   The rule also addresses penalties for bidders that provide falsified surety bonds or accept a contract offer and then renege on it in order to avoid surety bond forfeiture.

Licensure.  The proposed rule also would implement a MACRA provision that prevents a contract from being awarded to a bidding entity unless the bidding entity meets applicable state licensure requirements (for purposes of the rule, bidding entity is defined as the entity whose legal business name is identified in the ‘‘Form A: Business Organization Information section of the bid). CMS notes that this does not represent a change in policy, since CMS already requires suppliers to meet applicable state licensure requirements.

Price Inversion and Lead Items.  In addition, CMS proposes technical methodological changes to address “price inversions” among similar products that sometimes occur in the CBP, whereby the SPA for an item with fewer features is higher than the SPA for the item with more features (e.g., non-powered versus powered mattress, enteral pump without alarm versus pump with alarm). To prevent situations in which beneficiaries receive items with fewer features at higher prices than items with more features, CMS is proposing to adopt a “lead item” methodology under which all HCPCS codes for similar items with different features would be grouped together and priced relative to the bid for the lead item. CMS also proposes a methodology for using SPA information for such related products to adjust DMEPOS fee schedule amounts outside of CBAs.

Appeals. CMS also proposes to expand contract suppliers’ appeal rights in the event of a breach of contract action by CMS and clarify related provision. CMS also requests comments on a series of issues related to timely access to DME benefits for individuals dually eligible for Medicare and Medicaid.

CMS will accept comments on the proposed rule until August 23, 2016.  See the full text of this excerpted CMS fact sheet (issued June 24).  If you have questions or concerns about this proposed rule – or would like to suggest comments relative to the CBP issues – contact me at mark.higley@vgm.com