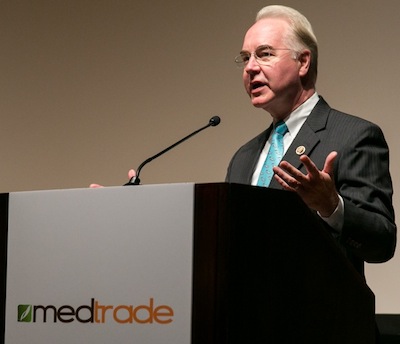 WASHINGTON, DC – HME providers who responded to a Medtrade Monday poll confirmed what many advocates are saying; Rep Tom Price (R-Ga) is a welcome choice to fill the coming vacancy for secretary of Health and Human Services. Nearly 85% are hopeful and/or excited about the possibility of Price as secretary.

However, the Washington Post and others are reporting that Senate democrats want to delay confirmation hearings to investigate Price’s trades in health care stocks. “He [Price] did this repeatedly and in such large numbers he’s likely to have made tens of thousands of dollars in one trade alone,” said Senate Minority Leader Chuck Schumer (D-NY) in news conference remarks reported in the Post article.

A History of Advocacy
During a speech at last year’s Medtrade in Atlanta, Price expressed his frustration with DMEPOS competitive bidding. “It [competitive bidding] just doesn’t make any sense at all,” Price told Medtrade attendees. “We continue to battle. We continue to fight. As was mentioned, 39% of DME suppliers have gone out of business since this craziness started. That’s not because they chose to retire…it’s because the federal government got engaged in the process and said, ‘We’ll pick the winners and losers’ and it’s just so sad.” Click Here to see extended quotes from Price’s Medtrade speech. &nbsp; 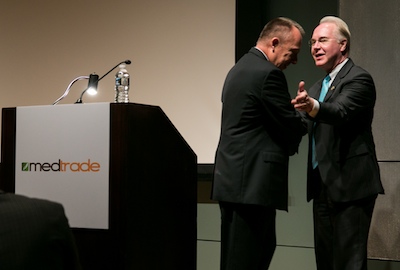 The following HME advocates have expressed support for Price’s nomination.
• “Dr. Price is perhaps the most credible voice on health care issues in Congress, thanks to his background as an orthopedic surgeon and assistant professor of Medicine at Emory University. He’s been a stalwart proponent of fair reimbursement policies, most noticeably and visibly through his efforts to replace the competitive bidding program with a market pricing approach.” — Tom Ryan, president and CEO of AAHomecare
• “Representative Tom Price (R-Ga) has been a strong champion of the HME industry over his six terms in Congress, and has spent considerable time and effort trying to make meaningful improvements to the Medicare DME competitive bidding program, and provide substantive payment relief for providers serving rural areas.” — Cara C. Bachenheimer, senior vice president, Government Relations, Invacare Corp
• “Price has been a strong advocate in Congress on behalf of HME providers with a focus on patient-centered health care. Price has sponsored, and led efforts over the last several years, to ensure that HME providers have the necessary resources to deliver the highest quality of care for their patients.” — John Gallagher, vice president, Government Relations, The VGM Group