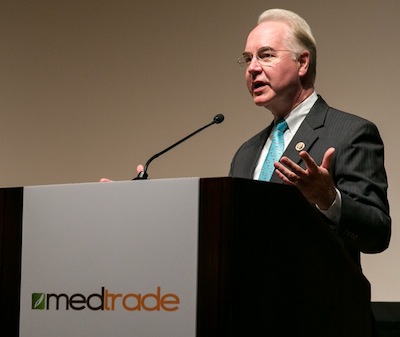 ATLANTA – Following a comprehensive legislative update from the AAHomecare team on day two of Medtrade, day three got off to an optimistic start with United States Representative Tom Price, M.D. (R-Ga) telling attendees that there was a “significant possibility that we can get a year’s delay [on bid expansion] starting January 1, 2017.”

There are no guarantees, and Price (pictured, upper left) added that any progress during the post-election period would depend on educating members of Congress during the final two months of 2016. Price’s 45-minute talk and Q&A on day three at Medtrade, covered a wide range of topics.

On competitive bidding: “It just doesn’t make any sense at all. We continue to battle. We continue to fight. As was mentioned, 39% of DME suppliers have gone out of business since this craziness started. That’s not because they chose to retire…it’s because the federal government got engaged in the process and said, ‘We’ll pick the winners and losers’ and it’s just so sad.”

On CMS: “They are not bad folks, but their charge is different than yours and mine. Your charge is to care for people. Their charge is to make the numbers add up…that hurts you from a professional standpoint, but patients are being compromised right now in their care because of what the government is doing.”

On audits: “Three to five years they say is the average [at the ALJ level]. If your appeal process lasts that long, then it is not a fair process…This is ridiculous. I believe we need a timeline. If the federal government can’t get their act together and move through the process, then it is decided in your favor after a finite period of time. For me, that would be six months.” &nbsp;

“Dr. Price is perhaps the most credible voice on health care issues in Congress, thanks to his background as an orthopedic surgeon and assistant professor of Medicine at Emory University,” said Tom Ryan, president and CEO of AAHomecare (pictured at Medtrade with Jay Witter, Tom Price, and John Gallagher). “He’s been a stalwart proponent of fair reimbursement policies, most noticeably and visibly through his efforts to replace the competitive bidding program with a market pricing approach.”

To contact your member of Congress during this crucial lame duck session, and find out more about how you can make your voice heard, Click Here to access the AAHomecare Action Center.&nbsp;