Catching Up With the 2017 Van Miller Homecare Champion

Catching Up With the 2017 Van Miller Homecare Champion

WEST BARNSTABLE, MA – If you are active on industry-related social media, you know that Gary Sheehan, president and CEO, Cape Medical Supply Inc, is a great follow on Twitter (@gmsheehan). Sheehan makes it easy to track legislative matters…and the New England Patriots.

Sheehan helps to run full service Massachusetts locations in Sandwich, Canton, Kittery, and Worcester, plus SleepExpress sites in Plymouth (two), New Bedford, Methuen, and Warwick, RI. It’s a lot of work, and it’s not something that Sheehan had originally planned as a career. His parents founded the company in 1977, the year before he was born, and Sheehan admits he thought it “would never be a career for me.”

In 2002, his parents asked if he might be willing to give it a try and help them grow the business. At that point, there were about 15 employees and the geographic area served was fairly limited. “Today I work with my two brothers—Mike, COO, and Kevin, director of MyResupply and PAP Replenishment,” says the 39-year-old Sheehan, winner of the 2017 Van Miller Homecare Champion award (shown here receiving the award at AAHomecare’s Stand Up for Homecare reception, held during Medtrade 2017 in Atlanta). “We’ve grown the platform significantly and are having as much fun as one could be expected to have in this industry these days.”

Medtrade Monday chatted with Sheehan about the importance of social media, as well as the appeal of the HME industry for young people. 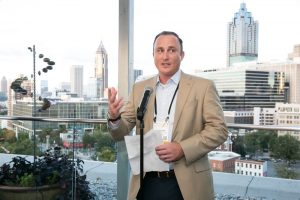 Sheehan: There is an element of significant growth within this industry in terms of the overall addressable market, depending on which subsector or service you are talking about. The unit reimbursement model is stabilizing, somewhat, and there remains tremendous population growth coming that will need the services that this industry provides.

Medtrade Monday: Why are younger people excited when it seems we hear so much negativity?

Sheehan: I think folks on the younger edge of the age spectrum are excited to deploy technology that will assist with cost management and likely see a long term play with respect to volume growth. They understand the market has been through, and remains in, an enormously disruptive period. However, this disruption and dislocation creates opportunity, particularly for younger folks who have a longer time horizon. So, I would say there are younger folks out there who are very bullish about this market, perhaps not this year or next year, but well within their career time/career horizon.

Medtrade Monday: What is your level of optimism these days with regard to the future of the industry?

Sheehan: I am optimistic that sophisticated providers, who are committed to strategic thinking and have an ability to execute difficult decisions, can do well. Providers who are tied to antiquated business practices and aren’t able to adapt very quickly will not be around much longer, and many are already gone. You’ve got to be very purposeful with your planning and measured in your progress. It’s a lot harder, impossible in certain places or at certain sizes, but I do believe there is a viable market here for folks who are deeply invested and committed to out-executing their competitors. 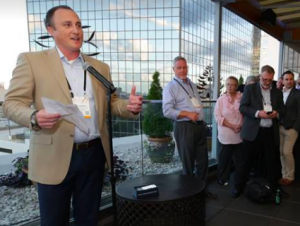 Sheehan: I was tremendously honored and humbled by that award, and my thanks again to AAHomecare, Tom Ryan, and The VGM Group for that…I was basically honored for doing what I think of as my job—serving my team members—it was very humbling. I think young people understand the need for advocacy very well. As board chairman and board member at HOMES, we have been actively pushing members to get to Washington, DC, and contribute to the dialog at the AAHomecare events, and we have had great success with many of our younger members making their first trips and seeing first-hand the impact it can have, particularly as you build relationships and return and are able to leverage those relationships into deep legislative and policy discussions around specific letters or legislation. Young people have seen, at the earliest parts of their career, the negative consequences of ham-handed policies advanced by Medicare, so you have this group, right as they enter the workforce, they see this disaster of a program destroy the market. I think they will be deeply engaged for the entirety of their careers as a result of that and will never rest for fear of CMS or some other agency foisting another horrific set of rules, regulations, or pricing on the market and evaporating their success overnight. This will stay with them for a long time.

Medtrade Monday: How important is social media in the fight to motivate people to get involved?

Sheehan: It’s a tool we would be foolish not to use. It is used in very sophisticated ways in DC and beyond and plays a prominent role in every major lobbying effort I have seen, in every industry. It’s not a substitute for showing up, it’s another very effective tool, with a very deep audience for raising awareness around issues of import for our industry. There are several industry folks who use it very effectively—AAHomecare and VGM Government Relations come to mind, but there could be more folks, more engaged, more of the time. It’s not a silver bullet, but it’s another proverbial arrow in the quiver for folks who care about public policy and care about the impact of legislative issues on our industry and on the healthcare industry at large.

Medtrade Monday: What has been the best product line these days for you in your own business, and why has it done well? What are potential challenges ahead for this product line?

Sheehan: We continue to focus on our sleep therapy business. We feel strongly that we have real competitive advantages there and a continuing ability to scale in that space, aggressively. It has been very challenging dealing with the reimbursement issues, but we have our heads down and are continuing to work hard to build out a business with demonstrable outcomes advantages, significant scale, and a really positive patient and referral partner experience. We are committed to it over the longer term and think the worst days are behind us. It’s healthcare—there are risks all over the place. We could cover a whole article on just that. We remain aware of them, regularly re-think and re-analyze them, and continue to be committed to getting significantly larger. We see ample room for experience improvement, and we are excited about the space and our place in it.