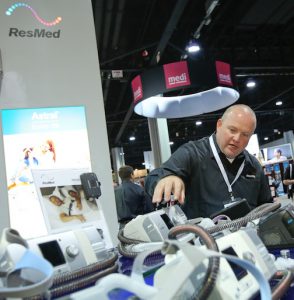 PHILADELPHIA – Academic research into the benefits of sleep apnea treatment continues, adding to what is already a mountain of evidence. Thanks to an unrestricted research grant from ResMed, researchers from the Division of Pulmonary and Critical Care, Einstein Medical Center, Philadelphia, found a high prevalence of undetected sleep-disordered breathing in hospitalized patients. Long-term follow-up of those compliant with treatment revealed a survival benefit.

Hospitalized patients were obese, and considered to have a high likelihood of sleep apnea. The following is an excerpt from the full study (click here for full text):

The major finding in this study was that patients treated and compliant with PAP therapy showed a significant survival advantage compared with those who were noncompliant. We do not believe that differences in various comorbidities explains the observed survival advantage of PAP therapy-adherent patients in that there were few differences in the prevalence of important comorbid conditions between the 2 groups, and this observation was supported using an inverse propensity score analysis that accounted for differences between the 2 groups. This finding also is consistent with our recent data targeting congestive heart failure patients.

In that latter analysis, we observed a trend toward improved survival in patients compliant with positive pressure therapy; however, it did not reach statistical significance due to the small numbers of patients. In this large sample size comprising patients with various comorbid conditions, we extend our previous findings by demonstrating a significant survival benefit in patients with sleep-disordered breathing who were compliant with PAP therapy, compared with noncompliant patients. In addition, our current analysis includes not only congestive heart failure patients, but patients with other medical conditions. Thus, our findings have greater generalizability to a broader spectrum of hospital populations. Our data suggest that once sleep-disordered breathing is identified in hospitalized patients, concerted efforts need to be made to initiate and maintain effective PAP therapy.

HME providers can speak with several sleep-related manufacturers (including ResMed) in person at Medtrade Spring, scheduled for March 27-29, 2018, at the Mandalay Bay Convention Center in Las Vegas. Click Here to save money and access Early Registration Rates.