TEMECULA, CA – Founded in 2009, Lifeflo Inc is a privately held company currently planning to debut three configurations of oxygen technology. Medtrade Spring attendees got an advance look at these LifeFlo products a month ago in Las Vegas, and they liked what they saw.

“The response at Medtrade Spring was absolutely overwhelming,” said Dan Normand, CEO of LifeFlo Inc, Temecula, Calif. “DME owners hovered around the booth like we were the queen bee. I walked away from that knowing that we were on the right track, and knowing that we have to get this to market as quick as we can and start building up the buzz.” 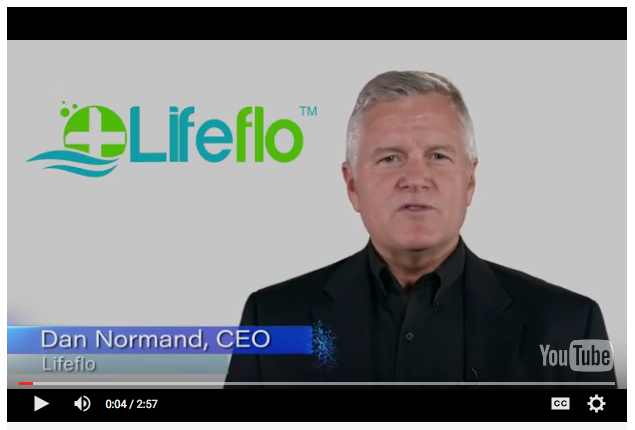 In the cash-only realm, the Lifeflo™ OTC Emergency Oxygen (www.lifeflooxygen.com) acts as a life-saving technology that DME providers can use to expand sales and connect to the community in a meaningful way. “We believe that carrying this technology [chemical oxygen generation] gives HME providers an opportunity to market a simple and affordable technology,” says Normand. “DME providers can sell this product without a prescription from the physician. People were shocked by that.”

For oxygen prescriptions, the Lifeflo™ Rx2.0 Supplemental Oxygen product amounts to two liters a minute for 45 minutes. “We filed a patent for this,” says Normand, “and it is the only oxygen ‘pill’ that is available.” Click Here (or click the photo) to see a video demonstration of Lifeflo.

Medtrade Monday sat down with Dan Normand to get a better idea of what DME providers can expect to see when Lifeflo’s products become widely available.

Medtrade Monday: What would you say to providers who may consider carrying this product?
Dan Normand, CEO of LifeFlo Inc, Temecula, California: We are able to make oxygen on demand, whenever and wherever it is needed. And they can sell this product without a prescription from the physician. People were shocked by that.

Medtrade Monday: Isn’t oxygen considered a drug that requires a prescription?
Normand: There is a little known category within the FDA—and when we got our product FDA cleared, they cleared it as an over the counter (OTC), so no prescription required—because the indication for use is for use during an emergency. It doesn’t matter what type of emergency, and they don’t define emergency. That just means that if somebody feels stressed, short of breath, migraine, whatever that person believes is an emergency, they are free to use this product, and purchase it over the counter.

Medtrade Monday: What about the Lifeflo™ Rx2.0 Supplemental Oxygen that does require a prescription? How can DME providers market this product?
Normand: It’s a little more complicated in a marketing sense for these DMEs, but they all got it when we explained it. The LifeFlo Rx2.0 is 2 liters a minute for 45 minutes. We filed a patent for this, and it is the only oxygen “pill” that is available.

Medtrade Monday: What do you mean by a pill?
Normand: When a physician prescribes a pill for patients, they take the pill and they can’t retake that pill. They’ve got that one pill. Let’s say a physician were to order two liters a minute of oxygen today. Without my technology, the only way that that patient can get it is that DME would have to deliver a concentrator, cylinder or something else. In that situation, the patient could take two liters a minute, but he could take maybe 4 liters a minute. And if the doctor said, take it for an hour, well, I’m going to use it for 6 hours.

There’s no control over how much oxygen that patient can take. With our device, the Rx 2.0, that doctor can now order an oxygen pill. It will deliver 2 liters a minute for 45 minutes, and when it is done, they throw it away. There is no stopping it once they start the chemical reaction. When it’s done it goes in their trash and they are done with it.

It is the world’s first oxygen pill and it really could change a lot of things, particularly the way DMEs provide backup oxygen, and in the ease of shipping. It is going to have a significant impact on their cost. They don’t have to put a tank on a truck with a body to drive it to someone’s home. They can call UPS, and for $8 dollars, it will be in that patient’s home the next day. 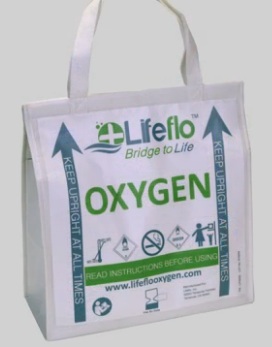 Medtrade Monday: What did you hear from Medtrade Spring attendees?
Normand: The industry is getting hammered with reimbursement cutbacks in competitive bidding. And some of the mom and pops that serve their local market are just unable to compete with some of the technologies that are out there.

Medtrade Monday: How can Lifeflo help?
Normand: We are offering these DME providers an opportunity at a cash-only business that allows them to reconnect with their communities; to provide a real life saving technology, that up to this point has just not been available—either because it is too complicated or too expensive. We believe that bringing technology back gives them an opportunity to market a simple, affordable, and potentially life-saving technology that could change the lives of millions of people.

Medtrade Monday: Do you think that message will resonate with HME providers?
Normand: Since Medtrade Spring, my phone rings twice a day with people asking: “Where are you at? Are you still on track to release? It’s been very exciting.

Medtrade Monday: How does the OTC Emergency Oxygen work?
Normand: Lifeflo’s patented OTC Emergency Oxygen device can provide 99.9% pure oxygen for 15-20 minutes at 6 LPM while waiting for emergency medical services to arrive. There is no medical emergency that cannot benefit from the delivery of oxygen. Having worked clinically and in the medical industry for over 30 years, I have never seen a device so simple in both its design and operation yet so impactful. Our goal is to not only put our devices into 124 million households in the United States, but into the hands of the 133 million at risk Americans suffering from chronic illness.

Medtrade Monday: Did you launch the products at the recent Medtrade Spring?
Normand: We did what I call a soft commercial launch at Medtrade Spring, which is not to be really high publicity, but to go out and test our message and pricing strategies and feel out the DME world.

Medtrade Monday: How was the attendee response at Medtrade Spring?
Normand: The response was just absolutely overwhelming. The booth had independent manufacturers, reps with their customers, and DME owners hovering around the booth like we were the queen bee. I walked away from that knowing that we were on the right track, and knowing that we have to get this to market as quick as we can and start building up the buzz.”

One of the founders of this technology is a gentleman by the name of Dr. Kevin Ward. At the time, he was at Virginia Commonwealth University, and he was a popular Department of Defense grant writer. He would go out and secure grants and get funding from DOD to investigate technologies.&nbsp;Lifeflo was one of the technologies that the DOD funded as an alternative means of oxygenating injured soldiers on the battlefield.

Medtrade Monday: Why did Lifeflo make sense as battlefield medicine?
Normand: The current solution was using oxygen pressurized cylinders, but they were a logistical night mare, and frankly a risk, because many of the medics would go out where they essentially had a 2,000 PSI bomb strapped to their back, just to give oxygen at the point of injury.

They stopped doing it because they knew the dangers of it. It was heavy, it was bulky, so they refused to do it, and the military found out about that and said, “We know the importance of oxygen delivery at the point of injury. So we have to figure out another way to do it.” And that’s where the initial funding for this chemical oxygen generation actually came from, and that was in 2006 to 2007.

Medtrade Monday: What is the IndieGoGo campaign? &nbsp;
Normand: A recent World Health Organization report noted every year over 5.9 million children die mostly from preventable or easily treatable diseases, and more than 95% of those deaths occur in developing countries. It was also reported that if medical oxygen were available in those instances we could see a 35% reduction in infant mortality. That is a staggering 2 million babies that can be saved each year.

Our awareness-building Indiegogo Campaign will enable anyone to provide oxygen during an emergency without requiring a doctor’s prescription, and at a very affordable cost. Visit the Indiegogo campaign directly by clicking here.

Lifeflo’s Rx1.0 Newborn easy-to-use device could be a key part of the solution producing 1 liter of oxygen per minute for two hours, in the thousands of rural villages where traditional oxygen delivery impractical.

Medtrade Monday: How can DME providers participate?
Normand: In support of this critical need, and after release of our OTC Emergency device, if you let us know that our product saved your life or a loved one, we will pay it forward and donate a Newborn unit in your name. We hope providers will consider making a similar contribution of a Newborn device during our Indiegogo Campaign or on our website. There’s going to be a limited amount of units that we are going to provide from IndieGoGo, which is the crowd funding campaign, and the real power of that to me is the social marketing and the social awareness.

Medtrade Monday: Where has the funding come from for Lifeflo?
Normand: This company has been funded by venture capital for almost 7 years now.

Medtrade Monday: Do you plan on being at Medtrade, scheduled for Oct 31-Nov 3 at the Georgia World Congress Center in Atlanta?
Normand: The plan is definitely to be there.