BLAINE, MN – Zopec Explore CPAP/BiPAP batteries have been gaining considerable momentum in recent years thanks to an ability to provide uninterrupted power via AutoSwitch Technology. Strong S. Huang, CEO and founder, Zopec Medical LLC., Blaine, Minn., is the mind behind the product.

As with many “overnight successes,” the 45-year-old Huang honed his skills over decades, meticulously taking his ideas from the garage to the manufacturing floor. As a chemical engineer (University of Wisconsin-Madison) who also earned a Master’s degree in Operations Management (University of Minnesota), Huang had the technical expertise to make his dream a reality. Lacking sales skills, he eventually switched jobs and buoyed that part of his resume with an eye toward leading his own company.

Putting up a great deal of his own money, Huang leveraged his medical, engineering, and design expertise, working with original equipment manufacturers (OEMs) to get production off the ground. After striking out on an electrotherapy idea right around 2014, he switched his attention to batteries.

“The electrotherapy failed because you should never develop a device that replaces doctors,” Huang says. “That’s when I started working again on the respiratory care battery, specifically the CPAP battery, and this has been a success.”

Launched just two years ago, the product has sold well because Huang sought to address a specific need, specifically more power in a lighter battery. “CPAP batteries can’t run a humidifier with a full night of sleep,” explains Huang, who also worked for the power generation division of Kohler. “That’s why the travel CPAPs don’t have humidifiers. People also need backup in case of a power outage. With the Explore, you just plug the CPAP in with no adapters necessary.” 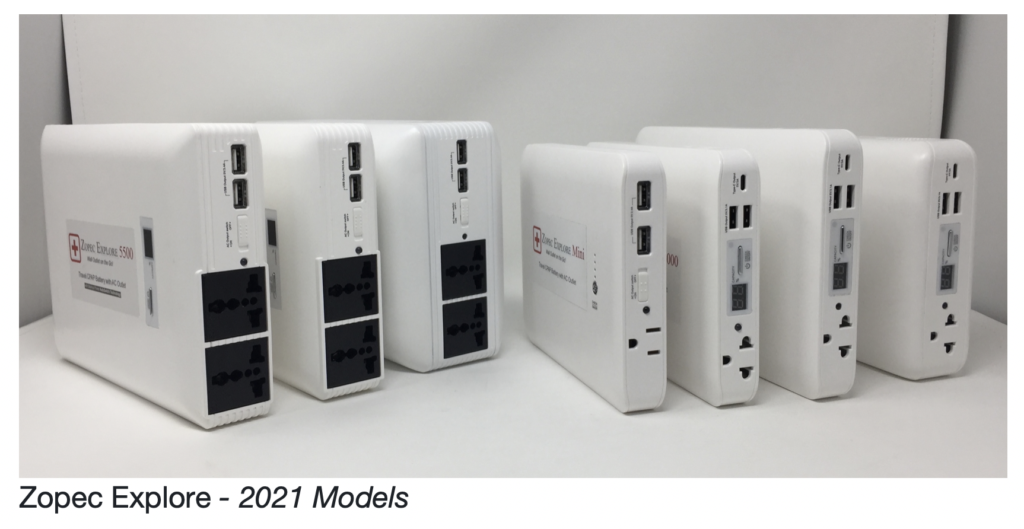 The battery has since been embraced by travelers and campers who appreciate that light weight (7.7 pounds) and power equivalent of two marine batteries. “During the week of the Medtrade Virtual Conference, we are launching the Explore Oxygen,” Huang says. “For the first time, you’re going to have a small battery with enough capacity to run portable oxygen, BiPAP with high pressure, with humidifier for multiple nights. Click here to see a demo.

“The Explore Oxygen is the first battery that has two AC outlets where you can run one side on a portable oxygen concentrator and the other outlet on a CPAP—and with the oxygen adapter to connect the two,” Huang continues. “That wasn’t possible before. We call this battery ‘the beast.’”