A Few Thoughts on the July 1 Fee Schedule Reduction

A Few Thoughts on the July 1 Fee Schedule Reduction

WATERLOO, IA – July 1 has arrived…and, unless HME providers have had their heads in the proverbial sand, brings to the industry the double whammy of the Round 2 recompete lower single payment amounts (to 91 metropolitan divisions in 117 bidding areas affecting almost half of the Medicare FFS population) and the second portion of the “phase-in” that CMS dubs as “adjustments to nationwide rates based on DMEPOS competitive bidding program (CBP) pricing.”

As you are likely most aware, the Affordable Care Act amended the Medicare Modernization Act to mandate the use of DMEPOS competitive bidding payment amounts to downwardly “adjust” the Medicare fee schedule in all non-bid areas.  As the chart below indicates, this began January 1, 2016, and from then until June 30, 2016, the DMEPOS fee schedule was based 50% on the 2015 fee schedule and 50% of the “national expansion” rates.

Somewhat simply stated, these rates were derived from an average of Round 1 and Round 2 CBA current payment amounts, averaged within eight Bureau of Economic Analysis boundaries (see diagram) and applied to the applicable state. Effective July 1, 2016, the DMEPOS fee schedule was reduced again to reflect 100% of the national expansion rates…which now included the comparatively lower Round 2 “recompete” single payment amounts in the calculation.  The cumulative cuts to the fee schedule under these fully-adjusted rates are substantial, with fees for many items reduced by 50% – 80% compared to the 2015 rates. (See the CMS fact sheet for several common items with the fees and percentage change from 2015 to July 1, 2016, as well as an excellent regional analysis from our friends at AAHomecare.) 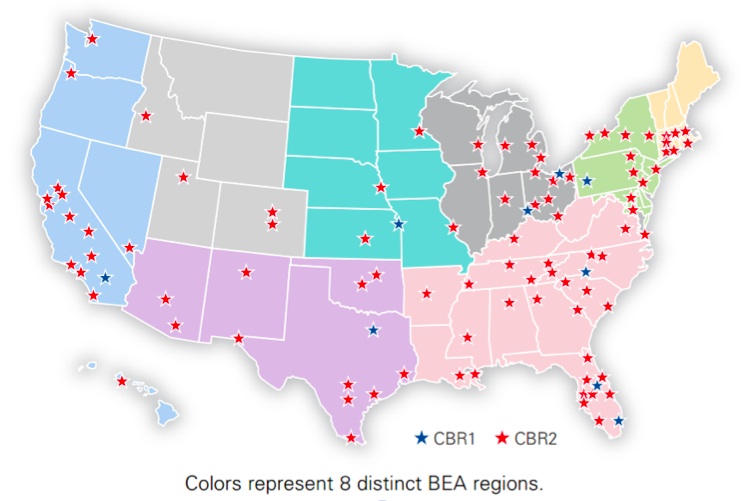 CMS has published the new fee schedule in ZIP format, but you can access both the DME and Enteral schedules via Excel files at vgmncbservices.com.  You might remember that last October CMS released a file of rural ZIP codes that get a 10% “adjustment” (it’s 110 percent of the average of SPAs from all eight BEA regions) to the new bidding-derived fees.

Here is an example:

However, and this is a common question this week; what about the fee schedule codes that have NO “rural add on”?  Why not? Here is an example:

Generally, there are four reasons:
1) The item is not a competitively bid item. Remember, these files are the complete DMEPOS/PEN fee schedules and not just a listing of Round 2 recompete bid items.  Non-bid items have not been affected and hence there is no rural add-on.
2) The item was, but no longer is, bid. CMS dubs these codes as “R110 methodology” which means “R” = “retired.”  The amount listed on the state fee schedule is 110% of SPAs from previous bid programs.  There is no 10% add-on, as the “NR” column already includes the add-on.
3) The item was a Round 1 only code. CMS dubs this as the “C110 methodology”, where “C” = current SPAs.  CMS refers to these as “For Items Included in 10 or Fewer CBAs” (remember Round 1 had only 9 metro areas).   The fee schedule amounts for these items are adjusted so that they are equal to 110 percent of the average of the SPAs for the “10 or fewer CBAs” (9 metro areas of Round 1).

Note: We have been asked to create a fee schedule spreadsheet of ONLY bid codes such that the HME provider does not have to ascertain whether the “blank” rural column is a non-bid item. Go again to vgmncbservices.com.

HME providers who have been following our government relations updates recognize VGM’s and the industry’s efforts to somehow mitigate these drastic reductions. CMS continues to contend that the phase-in of adjusted rates has not negatively impacted health outcomes or access to DMEPOS (based on data indicating that suppliers continue to accept the revised rates established in January 2016 as payment in full for most claims). Nevertheless, based on concerns that the deep reimbursement cuts will jeopardize the availability of DME for Medicare beneficiaries, particularly in rural areas, Congress is considering legislation to extend the transition to the fully-adjusted DMEPOS fee schedule.  Earlier this month, the Senate approved S 2736, the Patient Access to Durable Medical Equipment Act of 2016, which would extend the current transitional blended rates through June 30, 2017; fully-adjusted rates would then be implemented for services furnished on or after July 1, 2017.

As the July reimbursement cuts to DME have now been implemented, the industry has two options that offer much needed relief to providers that are facing the reality of a 50% cut to Medicare reimbursements. H.R. 5210 and S. 2736 have been passed in their respective bodies with two different long-term solutions. Now the leadership in both chambers must come to a final agreement in order to send this implementation delay to the President’s desk. The industry is pursuing these solutions through the finish line and pushing hard until a long term solution is met. Having two separate bills be passed unanimously in both chambers is arguably a big lift. It is because of you, and the countless providers reaching out to their members of Congress that allowed these pieces of legislation the momentum they required.

It is imperative that providers continue to advocate for the cuts to be retroactively delayed. There are many tools and resources in the VGM Action Center to engage with your local media and message your elected officials.

Lastly…get your patients involved!  People for Quality Care has created a grassroots engagement encouraging patients to reach out to their members of Congress. Click here for more information.  We are asking DME providers to give this informational sheet to their patients who will be directly affected by this expansion to the competitive bidding program.

Providers are encouraged to use these tools and continue to play an important role in the grassroots efforts to support the HME industry.