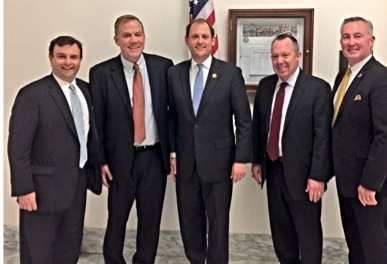 WASHINGTON, DC – AAHomecare President Tom Ryan recently attended a meeting in Erie, Pa, with Rep Mike Kelly (R-Pa). Kelly is a strong industry supporter and champion for HME suppliers in his work on the Ways and Means Committee. Time was spent discussing HR 3229 and the effect of competitive bidding rates in rural areas of the United States.

As Georgie Blackburn, vice president of Government Affairs for BLACKBURN’S, said: “Congressman Mike Kelly is a vital member of the House Ways and Means Committee and as a businessman himself, he understands the ramifications of poor policy. He’s constantly fighting for CMS and IRS accountability and transparency. We were especially delighted and proud so many industry leaders and colleagues joined us to make it a very successful meeting.“

Hands Off My Legs!
WASHINGTON, DC – When the four DME MACs released draft local coverage determinations (LCDs) for lower limb prosthetics on July 16, they had no idea what they were in for.

Among the issues with the new LCD is that it eliminates or restricts coverage of multiple prosthetic knees, feet and ankles that have undergone years of development, coding assignment, and widespread use by Medicare beneficiaries. The new rules would no longer take into consideration a beneficiary’s functional potential and instead rely on their documented performance using their immediately previous prosthesis when making a determination of the amputee’s functional level.

The new draft would also would preclude amputees from using a prosthesis if they failed to meet the subjective standard of “the appearance of natural gait” while using the prosthesis.

This draft has prompted an overwhelming response from consumers, associations and coalition groups. A petition to the White House received more than 100,000 signatures in 17 days, and approximately 300 people attended the public meeting about the draft on August 26 at CMS headquarters in Baltimore. After the meeting, many protesters headed over to the Health and Human Services building in DC to rally for the cause with signs and megaphones, calling “Hands off my legs,” and “I am an amputee. Medicare don’t forget me.”

AAHomecare has responded to these draft LCDs with formally submitted comments covering the impacts and strongly urging that the draft be withdrawn. “The draft is inherently flawed and is inappropriately being used to change the L code system,” said Kim Brummett, senior vice president of Regulatory Affairs at AAHomecare. “This rule will also disavow the K-levels for which Medicare amputees are eligible to receive different types of prostheses, and also the way that lower limb prosthetic services are delivered to Medicare beneficiaries. We believe the draft used in its current form will result in beneficiary access issues for amputees.”

Download the AAHomecare comments for an in-depth look at the flaws in this draft LCD.

AAHomecare also commented to CMS that providing a limited public comment period largely over a Congressional recess period, including a relatively brief meeting to allow for members of the public to express their concern about the draft policy, does not, in any way, allow for sufficient opportunity for affected stakeholders to participate in the LCD and Policy Article development process.

Ashley Plauché, AAHomecare manager of government affairs, also met last week with the Independence Through Enhancement of Medicare and Medicaid Coalition (ITEM Coalition), which includes stakeholders from United Spinal and the Paralyzed Veterans of America about the impact this LCD would have on crossover patients who also use wheelchairs, ventilators, and other durable medical equipment.

More background is available at SaveProsthetics.org (scroll down to “What is the Situation”), a coalition site from the American Board for Certification in Orthotics, Prosthetics & Pedorthics, Amputee Coalition, American Orthotic & Prosthetic Association (AOPA), Board of Certification/Accreditation, and American Academy of Orthotists & Prosthetists. AOPA took their response to the flawed LCD one step further when they aired ads relating to Medicare prosthetic cost-cutting in the DC market during the Sunday news shows as well as print ads in the Washington Post and The Hill.