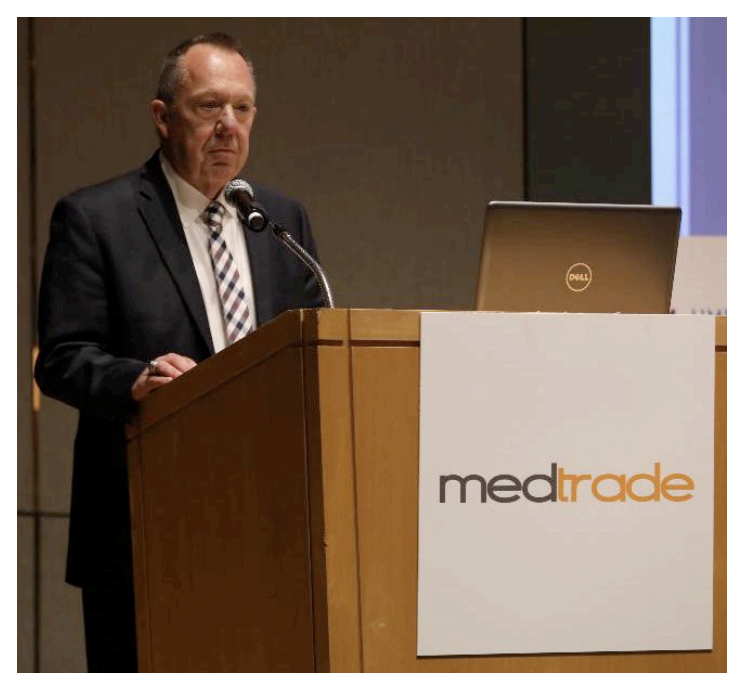 ATLANTA – Favorable HME-related items in the recent interim final rule headlined the agenda as American Association for Homecare (AAHomecare) leadership outlined the latest on competitive bidding, as well as the many regulatory challenges facing the industry, during their annual Washington Update session on day two of Medtrade.

“CMS basically said the program [competitive bidding] was broken and we’ve got to put it on hold and fix it,” said Tom Ryan, president and CEO, AAHomecare. “Now we want to hopefully increase the rates during the gap period that starts on Jan 1, 2019.”

According to Ryan, favorable items in the recent interim final rule (IFR) included

• relief for suppliers in rural areas and non-contiguous states (i.e., Alaska, Hawaii, and US Territories);

• acknowledgement of significant drop in HME supplier numbers and recognition that reduced access to DME may put beneficiaries at risk of poor health outcomes or increased length of hospital stays.

• extending relief to all non-competitive bidding areas; and

As for the gap period that allows all willing providers to participate in Medicare (at competitive bidding rates) once again, Ryan said: “Think it through before you jump in.”

ATLANTA – Industry veteran Georgie Blackburn has been selected as the winner of the 2018 HME Woman of the Year. Blackburn received the award during a ceremony on day two of Medtrade at the Georgia World Congress Center in Atlanta.

She was one of four finalists selected to attend the conference and the special award presentation. Having worked in the HME industry for 40 years, Blackburn played an integral role in expanding BLACKBURN’S line of business to better serve patients in the greater Pittsburgh area. She has been a determined advocate on the state and national levels having served on the Pennsylvania Association of Medical Supplies (PAMS) board of directors and AAHomecare’s executive board. Currently, Blackburn serves on AAHomecare’s Complex Rehab and Mobility Council, National Coalition for Assistive and Rehab Technology’s board, her local Chamber of Commerce board of directors, and is a deacon in her church. 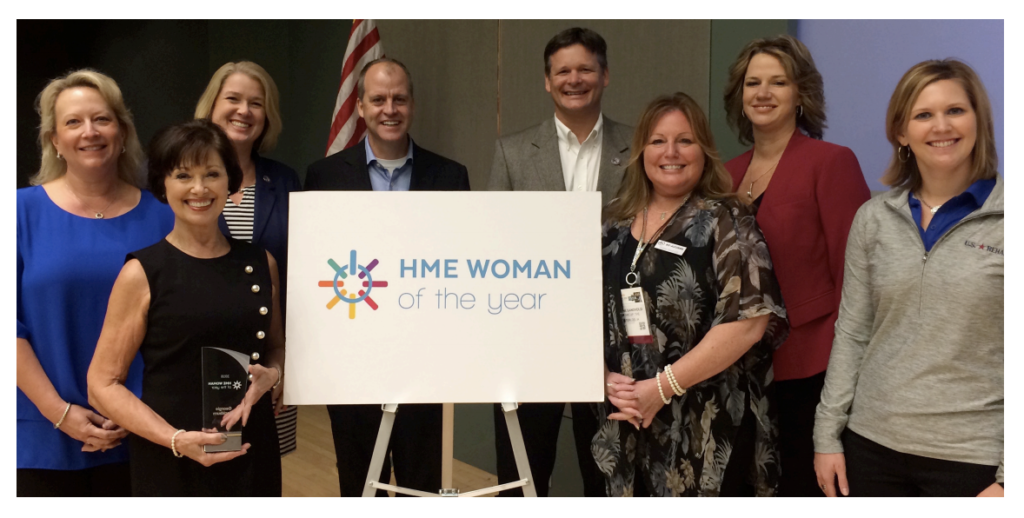 “There are so many women in this industry that I take my cues from, that I’ve learned from, so to be honored in this way is just wonderful,” said Blackburn, who is vice president of Government Relations and Legislative Affairs at BLACKBURN’S. “I’ve never gone to work thinking that I’m going to work. I’ve always felt that I am providing a service to somebody.”

Blackburn was revealed as the winner during a video presentation. Following the video, she was brought to the stage and received an award presented by Mike Mallaro, CEO of VGM Group. “On behalf of our entire VGM team, I am honored to present Georgie Blackburn with this well deserved recognition for all that she’s accomplished over four decades of service,” said Mallaro. “Everyone is better off when smart, passionate leaders champion optimal solutions and therapy for frail elderly and people with disabilities – educating and advocating. Georgie has done that relentlessly. She epitomizes what we, as an industry, look like on our best day.”

HME Woman of the Year nominations were received from all across the nation and included a broad spectrum of providers, manufacturers and other professionals in home medical equipment, rehab, respiratory and women’s health. Finalists were: Karen Atkins, president and CEO, Mobility First; Colleen Hunter, president and CEO, Browning’s Pharmacy and Health Care; Deanne Sandvold, vice president and owner, EZ-ACCESS, a division of Homecare Products, Inc. With the announcement, Blackburn joins Dr. Kirsten Davin, president of Precision Seating Solutions, and Barbara Leech, CEO of Healthline Medical Equipment, Inc., as HME Woman of the Year award recipients.

ATLANTA – The 2018 Van Miller Homecare Champion Award went to Regina Gillispie, president and owner of West Virginia-based Best Home Medical. The Homecare Champion Award recognizes and honors AAHomecare members for outstanding service to the HME community. The award is named to reflect the characteristics of HME visionary Van G. Miller, past CEO and founder of the VGM Group. Gillispie embodies these characteristics as a passionate and vocal advocate for HME, as a leader on public policy issues, and through service at the state/regional level. 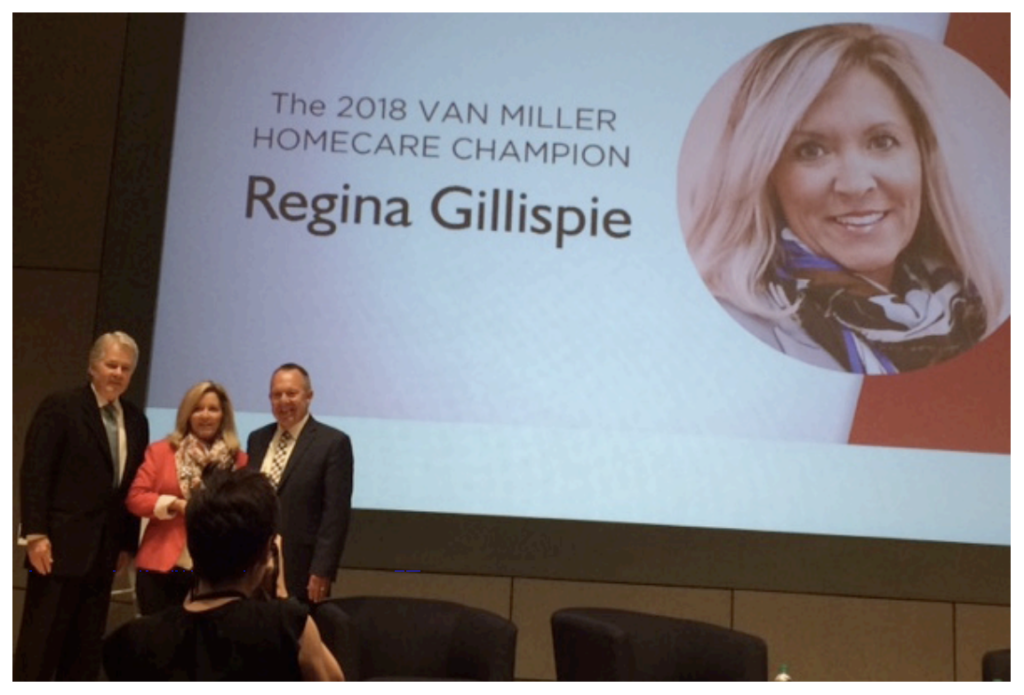 Gillispie wrote in a recent editorial: “My advocacy started when competitive bidding started. Two of my counties were included in round two of competitive bidding. When that first occurred, we all did not know what was going to happen. I went to DC and met with the late Senator Robert Byrd [died 2010] and our Reps who were up there at the time. At that point, I realized that they really did not know a lot about what was going on. Their staff was a lot of young people, and while that is ok, I wondered whether they would get the urgency— because HME is not something that affects their lives. In many ways, the whole process caught me off guard. I guess I thought everybody in DC knew about what was going on, but they don’t. That kind of opened my eyes.”

“I love this person,” said Tom Ryan, president and CEO, AAHomecare. “People like Regina essentially take on a second job [advocacy] and they move the needle in this industry.”