Anatomy of a Revalidation Nightmare

Anatomy of a Revalidation Nightmare

SALISBURY, NC – Having just completed Re-Accreditation a little over a year ago, I received my Revalidation notification from CMS in late April. This involves going to a CMS-related website, which I distinguish from root canal by the availability of anesthesia.

For the purposes of perspective, I will note that before I completely lost my mind and got into the DME business, I earned degrees in computer science / mathematics, and spent 30+ years in consumer products manufacturing and marketing, where intuitive practices and efficiency determine success. 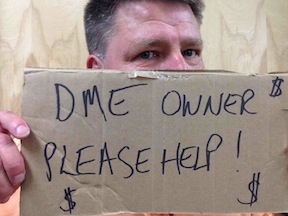 It took a few days to get mentally prepared (and to restock my liquor cabinet), but I eventually summoned the courage and went to the PECOS website. Surprisingly, I was able to navigate to the proper area in relatively short order. I was hoping that there might be a page listing all of my information, where I could click on a “No Changes” button, but unfortunately found that it’s designed so that you have to complete each section separately.

How could I hope for anything other than complexity from the people who developed an audit process under which a patient’s medical condition is irrelevant to whether or not they need medical equipment? “How can a quadriplegic qualify for a wheelchair if there was a missing date stamp on page 118 (of 123) of their medical records?” But I digress.

Surprisingly, I successfully completed the process in PECOS, and printed out documents stating that my application had been received, but the process was not complete until the application and Required Documents were signed and submitted. It then stated NOT to sign and return the application. It also didn’t tell me what the Required Documents might be—either on the website or in the printed confirmation. So, I called the PECOS help line at 866-484-8049, and they told me that the signature must be submitted electronically, and that I’d be getting an e-mail with instructions. I didn’t know it, but I’d just set sail on another Cruise of Confusion on the S.S. CMS.

I received the e-mail, which provided a website link, with instructions to click on the “My Enrollments” button. There was just one problem; there was no such button. So I called back to 866-484-8049, and rather than just being able to give them a reference number from my previous call, I once again had to provide my name, company name, address, phone number, e-mail, PTAN, NPI, and Federal Tax ID, all of which were read back to me. This lost time was frustrating, as later that day, I had hoped to complete important HIPPA training on the proper use of opaque versus translucent clipboards, and I’d been looking forward to this for weeks.  Sorry, I digressed again.

So the CSR at PECOS said that he didn’t understand why the e-mail gave instructions to click on the “My Enrollments” button, because no such button exists! He told me to click on another button, which is the most counterintuitive button on the page for the objective-at-hand. Nevertheless, he navigated me to a page where I was given false hope that I could submit my electronic signature, which failed because of an “ITIN.”

I asked what “ITIN” meant and he had no idea. But I can’t fault him for that—CMS lists no less than 4,500 acronyms on their website (I am not making this up). Unfortunately “ITIN” isn’t one of them. However there is hope for the future, as I hear that CMS (in an effort to reduce fraud and abuse) has a goal to double the number of acronyms by 2019!

He asked what else it said on that page and I told him there was a field that said “Awaiting Processing.” I was then put on hold.  If I’d known how long, I could have gone down to the FBI office to be fingerprinted as required by GUPICACA (Guilty Until Proven Innocent Clause of the Affordable Care Act).

After he checked with the WGCD (Wild Goose Chase Department), he advised that we need to get the status “Awaiting Processing” changed to “Returned for Corrections,” and that the only way to do this is to call NSC at 855-756-2150. I told him that this makes no sense whatsoever, as I had to complete all of the corrections before I could submit the application.

Nevertheless, he told me that this is the only way to complete the process. I was excited. Based on past experience, I figured that I could get this whole thing done in a fortnight or two.

So I called 855-756-2150 where a recording explains that you must complete the IVR process before you can speak with a representative. The IVR menu provides no options related to Revalidation, so I tried another unrelated menu option in hopes of getting a live person on the phone.

The IVR process involved entering my PTAN, which was incorrectly reported as invalid. There was no hope of speaking with a representative. So I sent an e-mail explaining my dilemma to a contact at NSC, whose expert advice was to just to call back to the same IVR number. When I re-explained that this would be futile and asked again for a number where I can speak to a live representative, I was told to go to the Supplier Manual and try to find a number there. I should have just called Nordstrom; if they couldn’t help, they would at least have refunded my $554 application fee.

I was eventually directed to a number where they answered “General Switchboard.” I said that I need to speak with somebody about Revalidation. She said, “Thank you for calling Blue Cross BlueShield of South Carolina,” and re-directed my call.

I called back and learned that I’d reached CGS, who provides general switchboard services for BCBS-SC. The operator was certain that she knew where to connect me, which turned out to be Physician’s Assistance at CGS, who told me to call 866-270-4909, where I was given the number for the NSC that was listed in my original Revalidation letter.

I called that number, got IVR, entered the Revalidation option, and was told that my Revalidation had been received and approved and that a confirmation letter had been sent! This made no sense, so I called back and eventually reached a CSR who explained that this response was referring to my Revalidation from three years ago! Holy HCPCS!

I passed Revalidation three years ago? I had no idea! I guess that I should have known that they don’t update the IVR status when they send out a new Revalidation letter—I mean, for the low cost of $554.00, they can’t think of everything.

Nevertheless, the CSR at NSC was most helpful. She advised that the signature process had in fact been completed (absolutely baffling), and that all they needed were the Required Documents. She even told me what they were, how to mark them, and where to send them!

Ten minutes later, two of my co-workers reported that they were trying to verify patient eligibility and got a message to the effect that our PTAN’s ability to do so had expired. Go figure. A quick call back to NSC, and they advised that this didn’t make sense, but this “unrelated” problem was in fact resolved quickly.

I wouldn’t be surprised if my Required Documents are returned because they weren’t paper-clipped together, or perhaps they were paper-clipped together when they should have been stapled; or perhaps because they weren’t stapled at all and regulations required that they be submitted loose-leaf in reverse order of the 3rd consonant on page 1, unless it’s an “R.”

No matter what I did, I am pretty confident that I did it incorrectly, and probably violated SPLMS (Stapled, Paper-Clipped, and Loose Leaf Mailing Standards) Final Rule of 2012, as amended in 2008. No matter what, if I didn’t do it correctly, I’m sure that there is a number to call to help me easily get things straightened out.

So in the end, I think that I accomplished a 10-minute task in just under 4 hours, which is my personal CMS website-related record. I feel like the best hockey player in all of Aruba. And people wonder why I often look like my dog when I say, “Daisy! What is 9 times 7?”

Craig Rae is president/owner of Penrod Medical Equipment, Salisbury, NC. Penrod is a single-location DME specializing in mobility and accessibility.