LAS VEGAS – CMS’ recent inclusion of non-invasive ventilators into the competitive bidding program is a bad idea (among many), and officials at the American Association for Homecare (AAHomecare) are working with advocates in the ALS community to get vents off the list.

“I’m a respiratory therapist from way back,” said Tom Ryan, president of AAHomecare, on day two of Medtrade Spring at the Mandalay Bay Convention Center in Las Vegas. “This [including vents] is outrageous, and it all comes back to dollars. They [CMS officials] look at utilization and consider vents easy prey. This battle is not over by any means.”

In addition to ventilators in the bidding program, significant challenges include: expanded and longer-term non-bid area relief; preparing HME community for CB Round 2021 via dmecbpeducation.com; and growing the membership base. 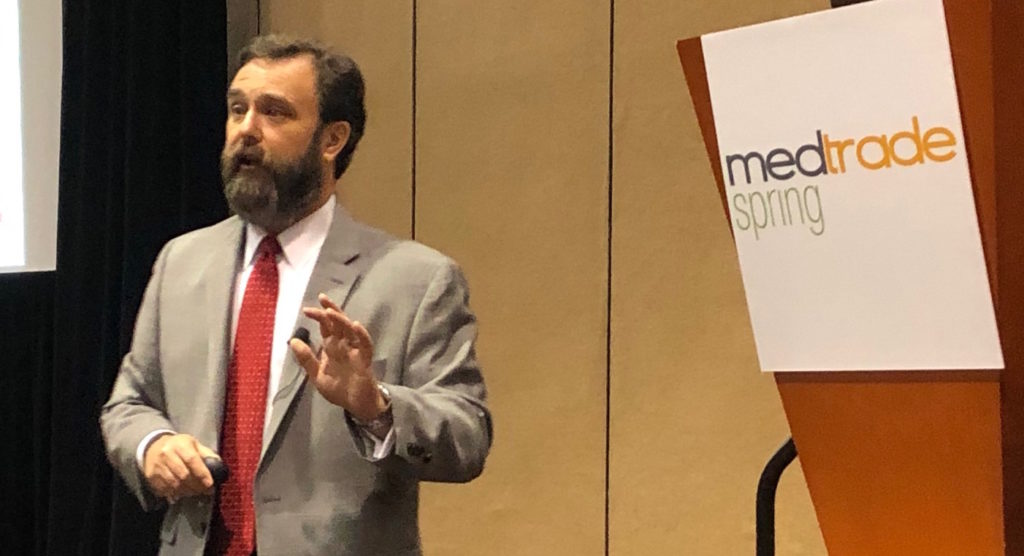 Ryan told attendees that competitive bidding is “here to stay” but pointed out that CMS at least acknowledged that “the system is broken” and put the bidding program on hold for two years as a result, while unfortunately “keeping the same rates in place.”

With lead item pricing, binding bids, and clearing price methodology in place, Ryan and team members Jay Witter (Government Relations [pictured]), Laura Williard (payer relations), David Chandler (payer relations), and Kim Brummett (regulatory) are looking to keep fighting with help from additional membership growth. “I continue to be concerned about membership,” said Ryan. “We are a $3.7 million organization…and if you consider the size of the industry, we should easily be a $10 million organization.”

WASHINGTON, DC – New calculators are now available at dmecbpeducation.com that allow suppliers to see how CMS’ new lead item bidding methodology will impact rates for other related items in 16 bidding categories for CB Round 2021.

The new calculators use the ratios derived from the CBIC calculator but have additional features that provide more contextual information, including rates currently in effect and results that show how bids entered will compare to rates for non-lead items in both dollar amount and by percentage.

Kim Brummett (pictured), AAHomecare’s vice president for regulatory affairs and Mina Uehera, regulatory affairs associate director, looked at the calculator from the perspective of a bidding supplier to determine what functions would be most useful.

They believe that showing bid ceiling and the current rates will be especially helpful for suppliers as they test potential bid rates, as will the ability to instantly see how results for non-lead items compare to current rates.

Their efforts also included verifying multiple nuanced functions of the calculations, such as:

The AAHomecare team is already at work on further enhancements to the calculators, including a feature that would highlight which non-lead HCPCS codes were responsible for the highest overall spend in categories based on 2017 information from CMS.  This will allow suppliers to focus on those HCPCS codes in a category with the most potential impact on the bottom line.

Brummett and Uehara especially appreciate the support and assistance provided by members of AAHomecare’s Regulatory Council in developing and testing this important new resource.  Find the new calculators at dmecbpeducation.com/bid-calculator.