A Closer Look at Medtrade Awards – College Canes and McKesson

A Closer Look at Medtrade Awards – College Canes and McKesson

Medtrade Monday spoke with Joe Shorb, development manager for College Canes, about the reaction they received from Medtrade attendees, many of whom lauded the company for its made-in-the-USA ethos.

Greg Thompson, editor of Medtrade Monday: Why do you think attendees voted for your product?
Joe Shorb, development manager, College Canes: I think we received recognition in part because of our responsible manufacturing. Collegiate licensed products are exciting in general. When you go a step further and commit to US manufacturing, and veterans’ causes, it makes the product even more exciting. We’re extremely honored by the votes we received.&nbsp;

Thompson: How optimistic are you these days about the DME and/or pharmacy industry?
Shorb: We have a great level of optimism. The initial response for College Canes has been very encouraging. It’s a growing market, and we see the need for quality American made products. Ultimately, it’s easier to engage with customers when you believe in the product. College Canes are a premium American made cane offered at a reasonable price point. It’s a feel good retail purchase that your customers will appreciate. 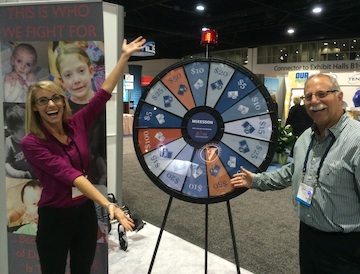 “Thank you to everyone who stopped by to spin [the charity wheel],” said Deanna Schaekel, marketing, McKesson Medical-Surgical. “We reached our $10K goal to raise money to fight the pediatric disease called Epidermolysis Bullosa, which debra of America calls ‘The worst disease you’ve never heard of.’”

“Thank
you to everyone who stopped by to spin [the charity wheel]. We reached
our $10K goal to raise money to fight the pediatric disease called
Epidermolysis Bullosa, which debra of America calls ‘The worst disease you’ve never heard of.’”&nbsp; — Deanna Schaekel,
marketing, McKesson Medical-Surgical – See more at:
https://medtrade.com/news/general-healthcare/Medtrade-Wraps-Up-in-Atlanta-Medtrade-Spring-Around-the-Corner-2707.shtml#sthash.4egiwpXX.dpuf

Medtrade Monday also spoke with Steve Dunn, marketing manager, DME, about the award, his level of optimism, and plans for the future.

Greg Thompson, editor of Medtrade Monday: Why do you think you won the award?
Steve Dunn, marketing manager, DME: Because of how effectively we integrated our pre- and at-show promotion to drive traffic to the booth, and for our execution of the promotion during the show.

Thompson: What is your level of optimism when it comes to the DME industry?
Dunn: McKesson is very optimistic when it comes to the future of the DME market. While the industry faces formidable revenue and cash flow challenges due to competitive bidding, the Recovery Audit Contractor program (RAC), and other market factors, McKesson is confident that DME providers will effectively adjust their businesses in ways that not only offset these conditions, but eventually leverage them to their advantage.

Thompson: What kind of marketing help/advice can you offer to DME providers who may want to carry your product?

Dunn: McKesson can help DME providers adjust to these new market realities by expanding into new product categories, shifting from a reimbursement to cash model, and controlling costs with services such as Patient Home Delivery.

Thompson: Will you be at Medtrade Spring 2016?
Dunn: Yes.