ATLANTA – The United States Power Soccer Association (USPSA – www.powersoccerusa.net) is back, and will once again play Nov 1, 2016—once in the morning and once in the afternoon—on the Medtrade Show Floor at the Georgia World Congress Center. Exact game times are still to be determined, so keep watching Medtrade Monday for more info. 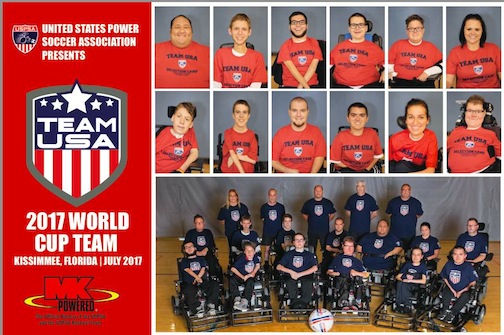 Power Soccer is the first competitive team sport designed and developed specifically for power wheelchair users. Athletes’ disabilities include quadriplegia, multiple sclerosis, muscular dystrophy, cerebral palsy, and many others. The game is usually played in a gymnasium on a regulation basketball court. Two teams of four players attack, defend, and spin-kick a 13-inch soccer ball in a skilled and challenging game similar to able-bodied soccer.

“If you put me in the fastest car on earth, I would not win the Indianapolis 500,” says Kevin Gaffney, group show director, Medtrade. “A great machine helps, but drivers win races. Much the same can be said of power soccer players. These are skilled individuals, and everyone who watched the power soccer demo back in 2014 can attest to that fact. I encourage Medtrade attendees to check it out this year.”

MK Battery (Booth #1527 at Medtrade) has been the main sponsor for United States Power Soccer for many years, and that is still the case. Medtrade is scheduled for Oct 31-Nov 3, 2016, at the Georgia World Congress Center in Atlanta.

“The chairs fly across the floor and spin with whiplash force,” remembers Greg Thompson, editor of Medtrade Monday. “I know because I sat in a chair and maneuvered the joystick in an attempt to pass the ball with expert player Jerry Frick. Frick maneuvers the chair with remarkable grace, and while he was patient with me, I repeatedly missed the ball as my chair careened out of control…This is a real sport with international competitions and dedicated players. Attendees on the Medtrade show floor got a chance to see the game up close, and all who attended gained a new appreciation.”