WASHINGTON, DC – A Sept 8 press release from CMS contends that the nationwide competitive bidding (NCB) program “is going smoothly with few inquiries or complaints and no negative beneficiary health outcomes.” The latest 1,200-word missive also reports that new single payment amounts have been chosen for round one 2017, and new contract offers are being sent to winning bidders.

The American Association for Homecare (AAHomecare) responded quickly, contending that CMS’ assertions tell a different story from what advocates are hearing from HME providers, hospital discharge planners, and patients.

“We’re especially concerned about the disruption for beneficiaries following the application of bidding derived-pricing to rural and non-bid areas, reducing prices by 50% to 60% for providers who don’t get any commensurate increase in volume that bidding program participants receive,” said Tom Ryan, president and CEO of AAHomecare. “We’re getting widespread reports that these cuts are beginning to severely impact our industry’s ability to support seniors and people with disabilities in small communities nationwide.”

A recent letter to Rep Rod Blum (R-Iowa) from Tanya Tysland, CEO of Gundersen Palmer Lutheran Hospital and Clinics (with multiple locations in Iowa and the Midwest) stands in stark contrast to CMS’ assessment. “These massive cuts will force many rural providers to close their doors and will impact the beneficiaries’ accessibility to the care that they need,” writes Tysland in a letter made available from VGM to Medtrade Monday. “In Iowa, providers are already being forced to reduce areas they cover causing access issues. The Competitive Bidding program has not faced rigorous evaluation on the negative impacts the program will have over the long run.”

At VGM’s People for Quality Care (PFQC), advocates have been collecting stories from a wide range of stakeholders experiencing precisely the kind of access problems that CMS officials are content to dismiss.

See below for a sampling of anecdotes collected by PFQC.
• For Rita Thomas of Eclectic, Alabama, Medicare cuts mean cutting back on her CPAP supplies needed to treat sleep apnea. Rita first called People for Quality Care in early July with concerns about her inability to get her CPAP supplies now that her home medical equipment supplier is having to bill patient claims non-assigned; patients must front the difference in what Medicare pays and the cost of the equipment. As of late August, Rita reports that she still has not received her supplies because she is on a limited income and cannot afford it. She tried contacting Medicare, but she said they were not helpful and simply offered to make note of the problem. “I am very concerned about paying up front for my equipment,” she said. “My husband and I live on a limited budget and having the money to do so is not an option” 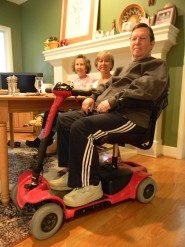 • Beneficiaries are not the only people burdened after Medicare’s funding cuts. Case managers and discharge planners like Kristie L. are having a hard time finding suppliers who still take Medicare patients. Kristie is a physical therapist and case manager from Leominster, Massachusetts, who has called numerous HME providers to find equipment for her patient but has found no one in her area is taking Medicare. “With Medicare rate cuts and competitive bidding, I am really struggling to find equipment for my patients,” she says. “I have gone through all my regular channels, and no one is servicing Medicare patients anymore.”

• “The cuts to HME are not just impacting Medicare patients, but Medicaid patients as well,” explains Cindy Coy, business office manager at Avera Health in Sioux Falls, South Dakota. The hospital-based home medical equipment provider has already limited its service area since the reimbursement doesn’t cover the extended travel and personnel expenses. They recently had to turn away a pediatric patient in search of oxygen because the child was not in their coverage area. Coy says many hospital-based providers are following suit and shrinking their coverage areas. “We do not want to turn patients away, but if we aren’t fiscally accountable we won’t be able to take any patients at all,” added Coy. “We are doing everything we can to cut costs. We are reviewing vendor contracts, looking at our delivery models, how we service patients; we are looking at everything.”

“To advocate for preserved access to medical equipment, call and send a letter to your legislator asking for immediate legislative relief,” say PFQC officials. “Visit People for Quality Care to learn more and to send a letter to Congress about this important issue.”

On the provider side of the equation, David C. Lyman RRT, director, Alternate Care, VGM & Associates, shared results of an ongoing survey that illustrate the business-damaging effects of NCB:
• 98% of providers surveyed agreed that the national rollout of competitive bidding has had a “negative impact” on business with 90% saying “strongly agree” and 8% checking “agree”;
• 57% of respondents have eliminated one to five jobs;
• 15% of respondents have eliminated six to fifteen jobs;
• 44% are in the process of closing a couple of stores; and
• 57% have significantly increased the amount of advanced beneficiary notices given to Medicare patients since the nationwide rollout of competitive bidding.

“Other CMS pronouncements of this type haven’t stood up to the test of time, such as their original assertion that unlicensed bidders taking part in the program wasn’t a problem,” added Tom Ryan. “Just a few months ago, the HHS Office of Inspector General confirmed that significant numbers of unlicensed providers had, in fact, taken part in round two of the bidding program in several states that license HME. Time will also tell how well today’s claims by CMS hold up.”