“Tuesday at Medtrade Spring has been awesome. We had a great turnout with a lot of new leads. We’re a specialty home infusion company, plus biomed, and it’s been a great introduction for attendees. Attendance and traffic has been better than expected, and we’ll definitely be in Atlanta later this year.”
—&nbsp;Daniel DiCosmo, district sales manager, MSD Medical Specialties Distributors, San Diego, Calif

“This show has been far better than in the past. It’s been a steady flow. People have come by and spent time. They are interested. The industry has been smacked down hard, but people are here at Medtrade Spring to learn how to survive in the next few years. For attendees, if they learn one thing of value, they have made their money back, because the reality is that we have to go out and find different ways to do things.”
— Ron Resnick, owner, Blue Chip Medical Products Inc, Suffern, NY

“We’ve been very busy and we’ve had great exposure among providers and RTs. Medtrade Spring is a great environment for learning what our customers need and want, and we take that into account for future research and development. We will also be in Atlanta for Medtrade later this year.”
— Carla Teixeira-Contreras, Inside Sales, ResMed Corp, San Diego

“We’ve had a good turnout at Medtrade Spring. We’ve had more quality talks and made good connections with people who were staying at the booth. We’ve had about 50 people who have never seen RemZzzs. We love Medtrade Spring and Medtrade [Atlanta]. This is our 7th year exhibiting at both shows, and I love seeing familiar faces—you form friendships.”
— Robert Rutan, owner, RemZzzs, Jackson, Mich&nbsp;

“Medtrade Spring has been fantastic. A lot of people saw us at Medtrade Atlanta last year. They did their homework and researched about us—and our presence really made a difference. Here in Las Vegas, we planned better and spent money on making the booth special. It has been money well spent. People said Las Vegas was a smaller show, but we have been really happy.”&nbsp; Editor’s Note: Stars N Stripes won the Best Booth Award at Medtrade Spring 2016.
— Mandy Chia, CEO, Stars N Stripes (KYMCO), Beverly Hills, Calif

“We were really busy Tuesday morning with another rush after lunch. Everyone was eager to learn about our pill management/medication compliance product.”

“Medtrade Spring has been great for us. We have products that are different. They are telehealth and they stand out. Tuesday was particularly great. We had several qualified leads, and we’re considering coming to Atlanta for Medtrade 2016. I love coming to Medtrade Spring. You get to meet with your customers outside of the office.”
— Mike Kauffman, national account manager, Managed Care/Long Term Care, ForaCare, Moorpark, Calif 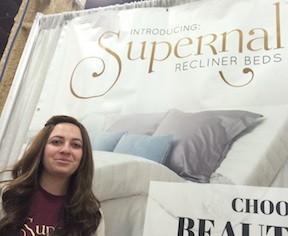 “The show has gone very well for us. We’ve made a lot of good contacts and quite a few sales. Our prototype Supernal SD, manufactured in the United States, has been well received. Everyone is waiting for us to announce when it will be ready to sell. We will definitely be in Atlanta.”
— Chani Meyer, trade show and sales manager, Supernal Recliner Beds by Transfer Master Products, Postville, Iowa 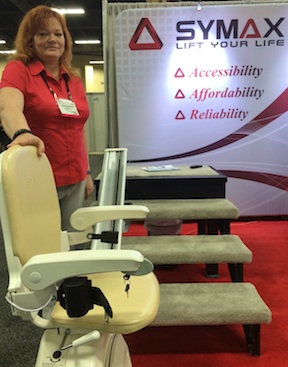 “We are first-time exhibitors at Medtrade Spring, and we have already decided to sign up for Medtrade 2016 in Atlanta. Medtrade Spring has been very successful. There were a lot of dealers here who were really interested in our S160 stair lift product.”
— Bonnie Brown, sales and marketing coordinator, Symax Lift (American) Co, Charlotte, NC 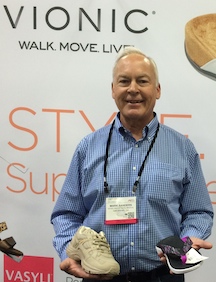 “Medtrade Spring was a great show. We partnered with the VGM Group, and as a retail vendor we are seeing tremendous interest in our brand. We will be in Atlanta for Medtrade 2016.”
— Mark Sanders, general manager, Medical Division, Vionic Group, San Rafael, Calif 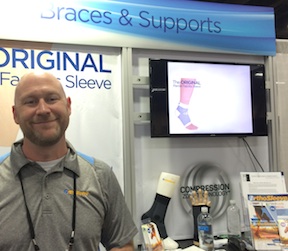 “This was our first time at Medtrade Spring. It was great, which was surprising considering it was only nine total hours of show time. In that nine hours, the attendees we encountered were serious, interested, and attentive. I ran out of cards and catalogs on the first day. I am sure we will be in Atlanta for Medtrade.”
— Josh Higgins, vice president, Sales, ING Source, Hickory, NC