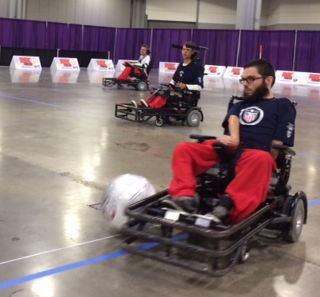 Power Soccer is the first and only competitive team sport developed specifically for power wheelchair users. Athletes’ disabilities include quadriplegia, multiple sclerosis, muscular dystrophy, cerebral palsy, and many others.

“It means so much to play for our country and to wear the red, white and blue,” said Pete Winslow, a 22-year-old Team USA player from Woodbury, Minn. “This is the highest level of competition for our sport, and I am happy to be a part of something bigger than myself. I also want to make history and to be a part of a team that wins three straight World Cups.”

Media outlets in the Atlanta area have a rare chance to see Team USA in action. Exhibition games will be played Tuesday, Nov 1, at the Georgia World Congress Center in Atlanta. The first game will take place at 11:00 a.m., and the second at 1:00 p.m. The court of play will be just off the center aisle, adjacent to the 700 Aisle in Building C (Halls 1-3).

Prior to the demonstration games, the team will be introduced during the American Association for Homecare Washington Update, scheduled for Tuesday, Nov 1, from 8:00 a.m. – 9:45 a.m., in Auditorium C101 at the Georgia World Congress Center in Atlanta.

United States Rep Tom Price (R-Ga) is also confirmed for the AAHomecare Washington Update. Prior to serving in Congress, Price earned an M.D. at the University of Michigan and practiced for nearly two decades as an orthopedic surgeon. Dr. Price has extensive knowledge of the benefits of home medical equipment (HME) and has proposed legislation to help the industry solve various problems.

The Game of Power Soccer
Most sports authorities agree that soccer is the world’s most popular sport—whether based on most fans, most participants, or whatever other definition is used to determine popularity. Many games have descended from the sport, and variations have developed from the game. Some were developed out of necessity, while others were modified to cater to people with disabilities.

Powerchair Football (aka Power Soccer) hopes to qualify the sport for inclusion in the Paralympics in the near future. Founded in France in 1978, today the game is played in 27 countries governed by the Fédération Internationale of Powerchair Football Association (FIPFA).

Thanks to the United States Power Soccer Association (USPSA), the sport became more widespread in the United States in 2006. International World Cup competition began in 2007, with Japan serving as the first host country. France hosted the second World Cup in 2011.

Both World Cups were won by the USA team. Players for Team USA are selected from over 60 club teams currently playing the sport in the United States. USPSA will host the third Powerchair Football World Cup in Kissimmee, Fla, July 5-9, 2017.

“Power Soccer is not just about winning and losing,” says Dominic Russo, USPSA president. “Life skills are developed to prepare these people for contributions to an independent lifestyle and productive contribution to society. All they need is a little help to discover their abilities, and power soccer helps to facilitate that end.”

The game is usually played in a gymnasium on a regulation basketball court. Two teams of four players attack, defend, pass and spin-kick a 13-inch soccer ball in a fast, skilled, and challenging game similar to the able-bodied game. Four major Championship Cup competitions are held annually around the United States, all sponsored by MK Battery, one of the world’s leading suppliers of batteries used in power mobility equipment, and the Official Sponsor of the USPSA and Team USA.

“This is an expensive sport for traveling to regional and international competitions,” says Wayne Merdinger, executive vice president and general manager of MK Battery, the main sponsor and official battery of U.S. Power Soccer. “Transporting competition-level wheelchairs and other specialized equipment for both the personal needs of players and for the games are big issues for the athletes, families and the fledgling not-for-profit. They require personal attendants, staff, referees, facilities and other costs typically associated with major sporting events. We encourage other corporations and individuals to step up and sponsor this worthy sport, especially for the tax deductible costs associated with the upcoming World Cup next year in Florida.”

Learn more about Power Soccer in the USA by visiting www.powersoccerusa.net/ and FIPFA at fipfaworldcup.org/