NEW YORK – According to an article in HME News (reprinted here with permission), HME providers report sleep patient volume is still growing, but not as much as in the past.

Sleep patient volume grew 3.6% in the last 12 months and is expected to grow 6% in the next 12 months, according to respondents to the “HME Sleep and Oxygen Survey” for the second quarter of this year, conducted by Needham & Co., a subsidiary of The Needham Group, an investment banking and asset management firm.

However, sleep patient volume was 6.6% and 7.9%, respectively, in a prior survey. 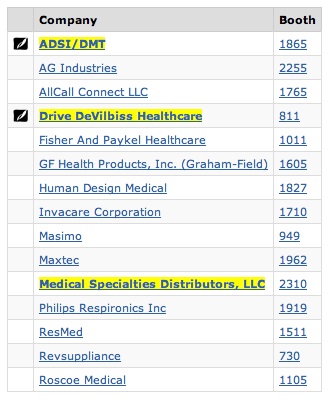 The survey also polled HME providers on home oxygen therapy. They report portable oxygen concentrators are expected to increase from 22.4% of the market to 26.8% of the market over the next 12 months. The highest rated POC, at 5.8 out of 7, was a private label device from Inogen, followed by the SimplyGo from Respironics and the G3 from Inogen. The survey results are based on 87 respondents.

Several sleep-related manufacturers (see list on left) will be exhibiting at Medtrade, scheduled for Oct 31-Nov 3, at the Georgia World Congress Center in Atlanta.