In Memoriam: Tributes Pour in for Van G. Miller

In Memoriam: Tributes Pour in for Van G. Miller 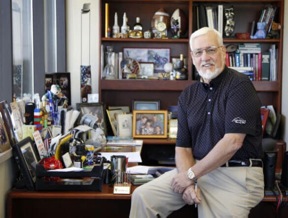 ATLANTA – It’s been little more than a week since the sudden passing of Van G. Miller, founder of the VGM Group, and tributes from around the country continue to pour in. Miller died Sunday, Oct 18, of an apparent heart attack. He was 67 years old.

With the Medtrade show starting today, Beth Bowen expressed a familiar sentiment. “It’s nearly impossible to imagine an HME world, or a Medtrade, without Van G. Miller,” said Bowen, executive director of the North Carolina Association of Medical Equipment Services. “He is deeply missed by so many.”

The following is a small sampling of remembrances and tributes from around the country. The Medtrade Show Daily, distributed on Wednesday, Oct 28, at Medtrade, will feature many more comments from Van’s friends throughout the HME industry.

• Jim Walsh, CEO, VGM Group Inc: I remember one Medtrade Spring in Las Vegas during the mid 1980s. Van spent 24 hours looking for me and his brother, because after we arrived we spent a full 24 hours going from casino to casino, and didn’t get back until they were packing up to close the show. VGM just started in the Fall of 1986, and we didn’t have the money or time to buy a booth that year, so we just went to the show “walking around.” We visited with manufacturers, learned about products, and tried to open accounts. Times were different then, and some of the major manufacturers would not even talk to us. We persisted, and Van got an Invacare contract out of that Medtrade Spring event. He bootstrapped that into getting some members, and by 1987 we were able to have a booth and start marketing our memberships and services to the HME world.

• Kevin Gaffney, group show director, Medtrade: Van Miller was synonymous with the HME industry, and I found him to be a compassionate and thoughtful leader—not only for the company he founded, but also a strong voice for the whole industry. He was always willing to share his thoughts with me about Medtrade, both good and bad—and he always shared those thoughts in a way that was geared toward making the show better, and the industry better. I really appreciated our interactions together at Medtrade, Heartland, and even in Washington, DC. The industry lost a good man, and the world lost a great one.

• Thomas Ryan, president and CEO, American Association for Homecare: I have been to more Medtrade shows than I care to count, and every show included a stop at the VGM party with the blinking button. You would see Van working the crowd—usually proudly wearing his American flag shirt. If you loved your job, like he did, you wanted to be with your customers—smiling, welcoming and enjoying. Van epitomized that. He worked the crowd, savored his customers, and enjoyed making a difference.

• Michael Hamilton, executive director, Alabama Durable Medical Equipment Association: I met Van in about 1977, when we were both lobbying, and we’ve been good friends ever since. When news got out about my wife’s passing recently, he was the first person from the industry who called me with condolences. In addition to the well-deserved accolades about his industry accomplishments, he was a kind, thoughtful, and caring person—always looking for an opportunity to help others. Van was the only person in my adult life who called me “Mikie!” The leadership qualities he exhibited with his associates contributed to making them some of the best folks in our industry. Because he was such an outstanding leader, the organization he built will continue to prosper and improve the industry.

Check the Wednesday, Oct 28, issue of the Medtrade Show Daily for many more remembrances and tributes to Van G. Miller.