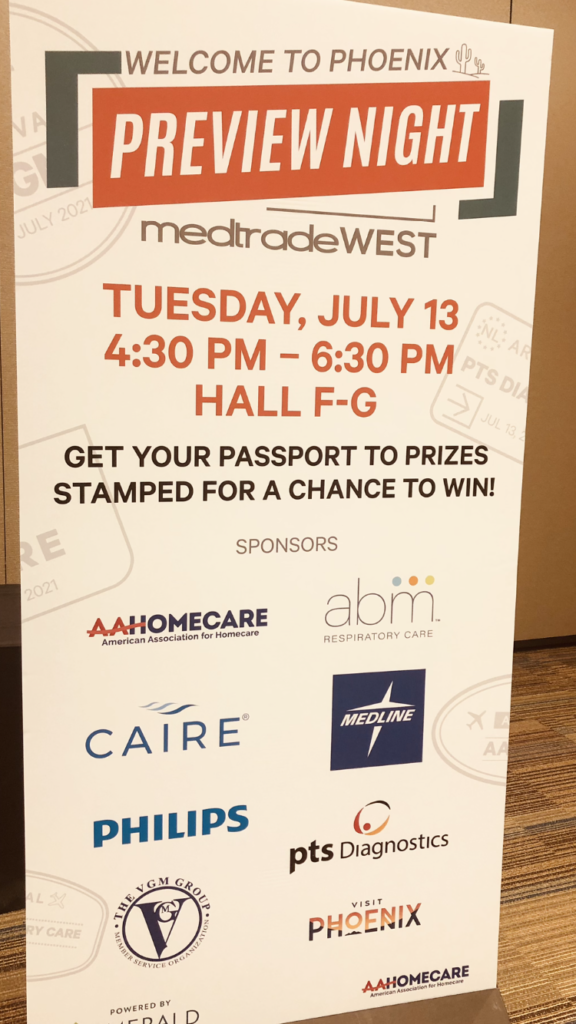 PHOENIX – A new town (Phoenix) and a new event (Preview Night) received rave reviews on day two of Medtrade West. If you stayed home, you missed a lot.

Complete with four sponsored bars, Preview Night gave attendees a two-hour glimpse of the trade show floor prior to the full final day. With drinks flowing and music playing, social interaction combined freely with serious business for a successful debut. See below for a sampling of opinions from exhibitors.

“We had really good foot traffic at Preview Night. This was a full-on we-want-to-do-business atmosphere among attendees. We were pleasantly surprised. Was there socializing? Yes, but there was actual business too. It was a wonderful mix of the social and the business.” — Cynthia Tolson, senior business development executive, BOC, Owings Mills, Md.

“Preview Night was a highlight. I wish we had more time at Preview Night. We will be at Medtrade East in Atlanta.” — Nikki Zemovich, Sunset Healthcare Solutions, Chicago

“It’s been a relaxed atmosphere, but in a good way. The city has been very accommodating and the Medtrade staff has been wonderful.” — Steve Porcaro, director of Business Development, The Ruby Slipper

“Preview Night was awesome. It was the perfect combination of having a drink and mingling. It had a casual, less-rushed feel and was really nice. Phoenix is a great town. PainGone has been a huge hit at Medtrade West, and we will be at Medtrade East.” — Jackson Buchanon, director of Business Development, Sleep 8, Inc. and PainGone 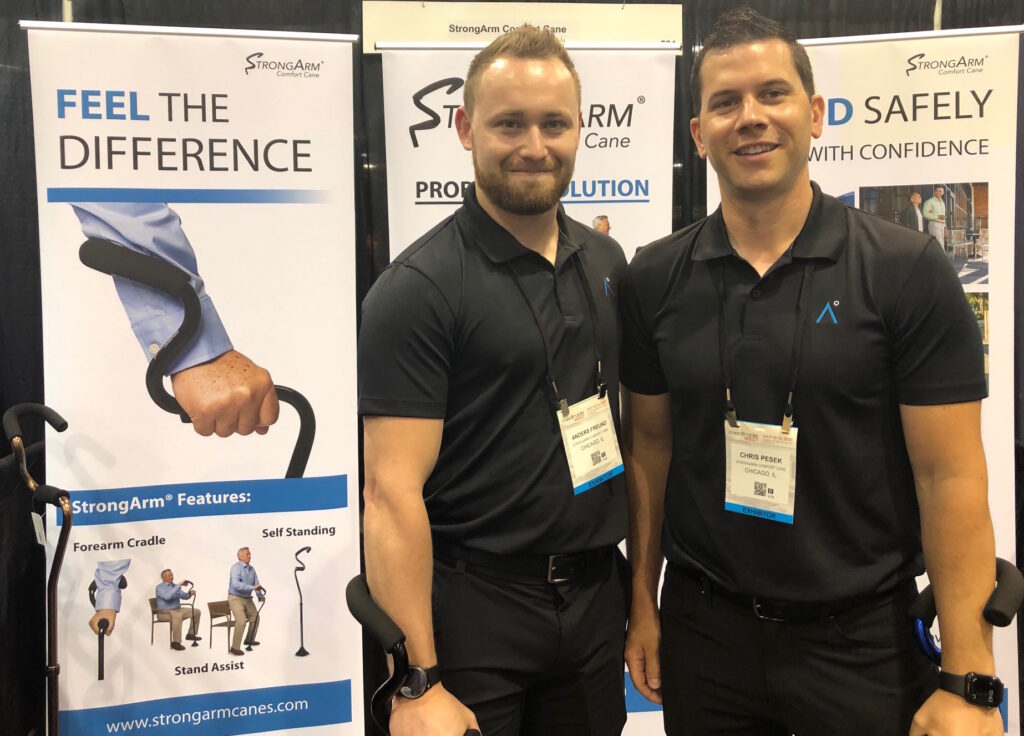 “There was great energy at Preview Night, and there was a lot of excitement about getting everyone together. We had an awesome response to our product. There’s finally innovation to the walking cane—specifically shifting weight from the hand to the forearm.” — Chris Presek, president, StrongArm Comfort Cane

“The change of scenery from Las Vegas to Phoenix was good. Phoenix is more of a place to do business. Preview Night with its two hours and alcohol privileges was better than two full days. It was a great opportunity for attendees to get the lay of the land.” — Matt Golen, sales account manager, Universal Software Solutions, Davison, Mich.

“Reaction has been great, and the booth is attracting everyone in. As far as the quality of the attendees, we are very happy. They are qualified attendees. The people here are willing to partner, and it’s been really great. I would pay to have this show go longer.” — John Burns, marketing manager of B to B, Vive Healthcare, Naples, Fla. 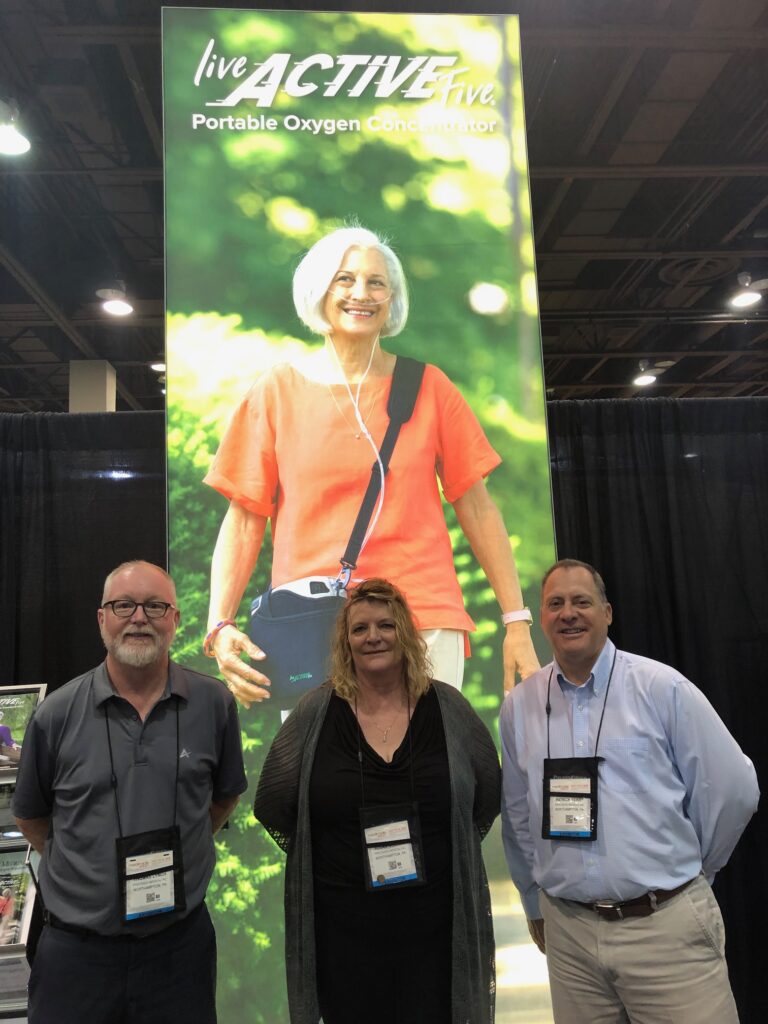 “Preview night was very good, and we had lots of people stop by the booth. The restaurants and hotels in Phoenix have been great. We will absolutely be at Medtrade East in Atlanta, and we’ll be debuting a new booth.” — Patrick Ferry, national sales manager, Precision Medical, Inc., Northhampton, Pa.

“We were really happy with the amount of people at at Preview Night. It was a nice casual event and I liked the timing which allowed people to grab dinner afterward. People at Preview Night were willing to talk business. We were a passport partner, and I like those programs. There were people who came over and it seemed they just wanted to get their passport stamped, but I had 20-minute conversations with a couple of those stamp people…and we will be at Medtrade East.” — Barry Hassett, vice president of Global Marketing, CAIRE, Atlanta

“Phoenix was a nice change of pace, and Preview Night had a lot of good traffic. It was very beneficial as far as productive conversations. The timing also allowed exhibitors and attendees to go to dinner with customers with the 6:30 end time. We had good engagement with people interested in our new sleep apnea masks. We will be at Medtrade East in Atlanta this October.” — James Gibbons, Fisher & Paykel

“Preview Night was better than expected with good foot traffic and good engagement. The timing really worked. The reaction has been good with interested people who wanted to know more. We were mostly meeting with decision makers, and a lot of start-ups who were learning the ropes.” — Joe Bohn, senior sales manager, Waystar, Louisville, Ky.

“Preview Night was great. It was definitely a success. It was awesome. Today has been slower, but we still have activity.” — Terri Minnich, Acu-Serve Corp, Akron, Ohio

“We’re a disruptor and unique in the space, so it’s been very positive with a lot of interest in not just the breast pump but also the pelvic trainer. I have been pleasantly surprised at the attendance. As for as the attendees, everyone we have talked with had the authority to be a buyer.” — Michael Harris, vice president, Healthcare, elvie

“Preview Night was good. It was nice to be able to have a drink and interact in a casual setting. I do think there should be some overlap between booth hours and conference hours. We want to support the industry and get back to face-to-face interaction, and it’s great to showcase our products again. We will be at Medtrade East for more product launches in the Fall.” — Renae Storie, vice president, Pride Mobility, Exeter, Pa.

“Preview Night was fantastic. Attendance was fabulous, upbeat, and positive. To actually shake hands with customers has been the best part. We talked with decision makers who were receptive to the technology.” — Nyika Wright, SleepGlad, Columbia, Tenn.

“In Phoenix there are fewer distractions. The people here are a lot more engaged than people in Vegas. We’ve been happy with the foot traffic and pleasantly surprised. It’s been a good show. We’ve had good interest and attendees want follow-up conversations. We try to make it as easy as possible for providers to capture the credit card information with reminder calls. We are adding new features and they are appreciating and loving the text messaging features.” — Sharon Bock, director of Marketing, Allegiance Group, Overland Park, Kansas 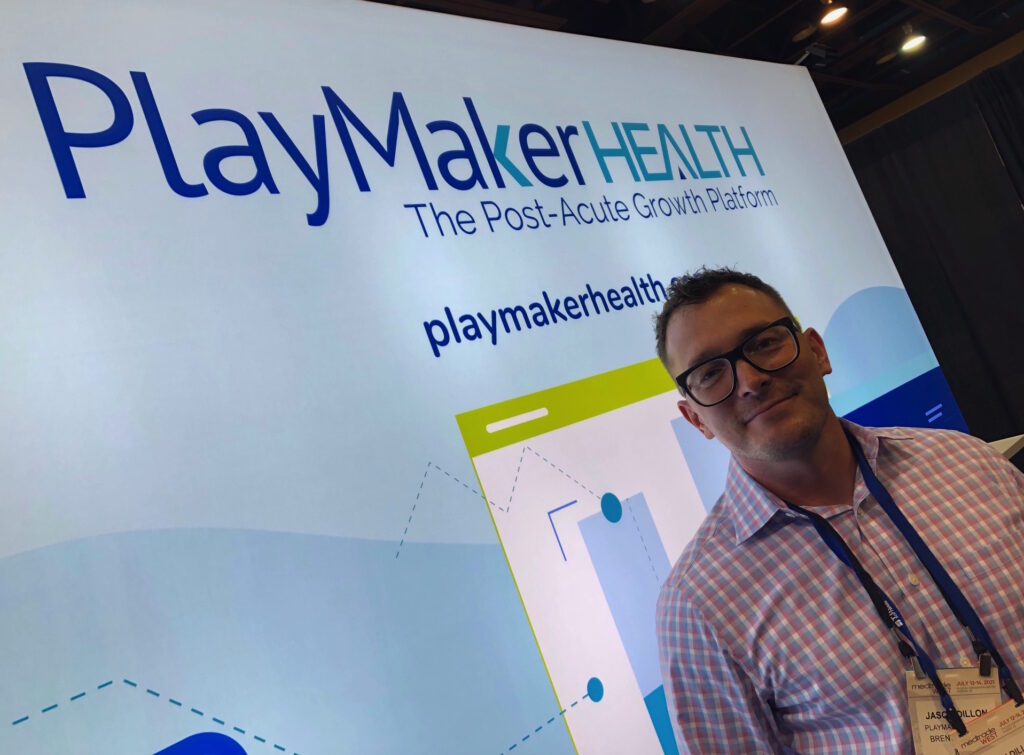 “It’s less expensive to come to Phoenix. Preview Night was good overall for us. The quantity was down but the quality was up. Every conversation has been meaningful. The conversations have substance. We are already signed up for Medtrade East in Atlanta.” — Jason Dillon, sales director, PlayMaker Health, Brentwood, Tenn.

“Preview Night was phenomenal and busier than we expected. Attendees are engaged and they are decision makers. They are interested in the new things we are offering. We’re seeing mostly existing customers looking to add functionality. We’ve had better quality education with 30 to 40 per session. Sessions were very interactive and audience members appreciate the collaboration.” — Jennifer Leon, vice president of Patient Collections, Brightree, Peachtree Corners, Ga.

“Preview Night was great. We loved it. We had great booth traffic and a lot of enthusiasm. The no-conflict between education and floor time is good. We had very good quality of attendee. People who are here really wanted to be here. We are talking to motivated people. We are already signed up for Medrade East in Atlanta.” — Christopher Sellwood, vice president of Sales, Newport Beach, Calif.

“There was really good energy at Preview Night and the cocktail aspect allowed for more interaction. It’s a really good thing to have no conflict between education and show floor time because there is no decision to be made for attendees. They don’t have to sacrifice time on the show floor.” — Kelley McClain, senior marketing manager, PTS Diagnostics, Whitestown, Ind.