ATLANTA – Medtrade East is over and it marks the end of an era for Medtrade in Atlanta. Those who made the trip experienced an exciting show with a positive vibe.

ATLANTA – Medtrade East is over and it marks the end of an era for Medtrade in Atlanta. Those who made the trip experienced an exciting show with a positive vibe.

ATLANTA – Medtrade East is over and it marks the end of an era for Medtrade in Atlanta. Those who made the trip experienced an exciting show with an unmistakably positive vibe. Conference and Expo attendees alike heard honest assessments and real solutions, leaving with inspiration and optimism.

Tom Ryan, president and CEO of the American Association for Homecare offered a combination of realism and hope, while resisting the urge to sugar coat the industry’s current obstacles. “Providers are stressed, and we are seeing more challenges,” said Ryan during the AAHomecare Update. “We are optimistic that we are going to get some relief at the end of the year.”

While things may well improve in the coming months, Jo-Ellen Reed, an account manager for HME News since 1994, may not be tracking the industry’s fate as closely as she once did. Reed retired at this year’s Medtrade East, ending a remarkable 28-year tenure with Maine-based HME News. If you don’t know Jo Ellen, rest assured that advertisers/manufacturers know her well. 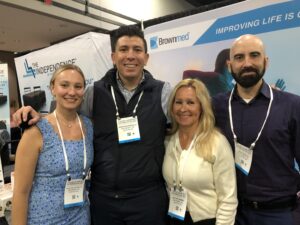 Those types of face-to-face relationships are common within the HME industry and those bonds are solidified at Medtrade every year. In 2023, the show will meet once from March 28-30 in Dallas. The one-annual-show format provides a single rallying point, specifically designed to springboard providers in the new year.

I spoke with a lot of attendees at last week’s Medtrade East, many of whom offered their assessments, backing up the contention that in-person interaction is still meaningful and valid. “We come to Medtrade for the in-person / booth discounts and to catch up with our reps,” said Janet Butler, an attendee from Access DME in Chattanooga, Tenn. “We want to see what’s coming to the industry and compare products in-person. We found some new products such as the IMAK Active Gloves, one of the brands in the Brownmed family.”

The folks from Brownmed (pictured above) interacted with attendees, giving out free samples, and spreading word about their products. In fact, Janet Butler was wearing their gloves when I asked for her Medtrade comments.

All of it adds up to a web of networks that prove fruitful in sometimes unexpected ways. If you don’t go, you’ll never know. Whether you’ve been to many Medtrades or none, I hope you consider joining us in Dallas next year. I look forward to seeing you there.