WASHINGTON, DC – In the wake of last week’s release of competitive bidding Round 2 Recompete results, AAHomecare began its own analysis of the prices provided by CMS – a daunting project with 100+ CBAs and thousands of HCPS codes to sort through.

Here are the results in Enteral Equipment and Supplies, Enteral Nutrition, NWPT Supplies and NWPT Pump, and Hospital Beds. These are the first categories have tackled, and they are presented here in terms of change between the new Round 2 Recompete rates vs the Round 2 rates currently in effect: 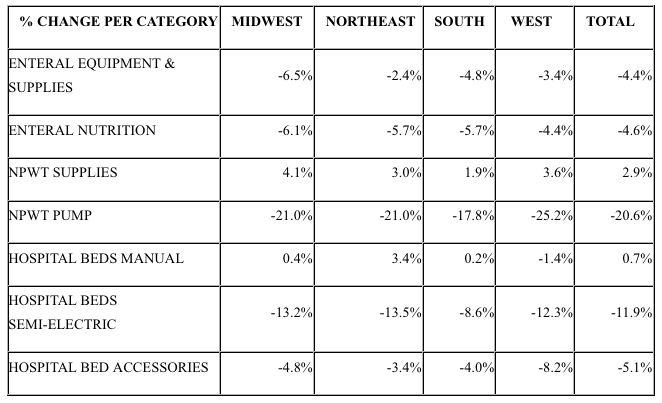 The continued downward march of prices in most categories is dismaying, and will cause pain for both winning and non-winning bidders, as well as Medicare beneficiaries as some companies cut back on services or shut their doors. In addition, competitive bidding contractor Palmetto GBA shared their estimate that the Round 2 Recompete prices represent a 49% reduction overall when compared to the 2015 schedule.

These stark numbers cry out for meaningful action by Congress to make changes to the bidding program that will allow for HME suppliers to stay in business.&nbsp;New legislation is a first step in that direction.

•&nbsp;Delay the second cut for HME items in non-bid areas by 15 months.&nbsp; This would push back the second cut from July 1, 2016 until at least Oct. 1, 2017.
• Replace the bid ceiling for future rounds of bidding with the unadjusted fee service rates from January 1, 2015 instead of CMS’ current plans to limit future bid ceilings to the previous bid rates.

Additional provisions and details on the legislation can be found in this alert and in the items and resources noted below:
•&nbsp;Send an email to Congress here – use that link to quickly send a letter to your legislators in support of S. 2736 (and forthcoming House companion legislation), and please pass this link along to your friends, family & other potential supporters.
•&nbsp;Updated AAHomecare issue brief – additional detail and talking points on why this budget-neutral, bipartisan legislation is critically needed.
•&nbsp;S. 2736 bill text
• Current sponsors – are your Senators on the list?

Strong Outreach to House Members Needed During Recess Period
Industry champions in the House have asked providers/advocates to make an extra effort to build awareness and support on this issue in advance of companion House legislation. As many original cosponsors as possible are needed on the legislation before the April 12 target introduction date.

Members of the House should contact Congressman Tom Price and agree to be cosponsor of the bill, and should also contact House leadership, as well as Ways and Means and Energy and Commerce committee leaders about the bill.

“It is vitally important that we build co-sponsorship and gain support on these two committees in advance of introduction, so please make every effort to make these requests of House members in the next two weeks,” wrote AAHomecare officials. “And, if you are represented by any members on those influential committees, your efforts to contact those offices directly will be especially valuable. Direct engagement with legislators and their staff members is the most effective means to advocate for better public policy for HME.&nbsp;Make plans to meet with your legislators when they are back in the coming weeks.”

In addition to the upcoming Easter recess for both the House and Senate (Mar. 24 – Apr. 1), legislators will be on break from DC during these periods: