KEARNEY, NE – When Bob Johnson found his Kearney, Nebraska-based business subject to competitive bidding rates on Jan 1, 2016, it was expected and surprising at the same time.

“It [the rollout] was a shocker,” said Johnson. “We are going to have to change our business model. Retail sales is going to be driving us with less reliance on Medicare, Medicaid, and third party insurance. We have to look for new avenues, and that’s why we were at Medtrade Spring. We are also considering attending Medtrade later this year [Oct 31-Nov 3, 2016] in Atlanta.” &nbsp;

First-time Medtrade Spring attendees such as Johnson, owner of Mid Nebraska Mobility in Kearney, made the trip in hopes of finding new ways to cope with phase one of the Jan 1, 2016, competitive bidding rural rollout. He was not alone. 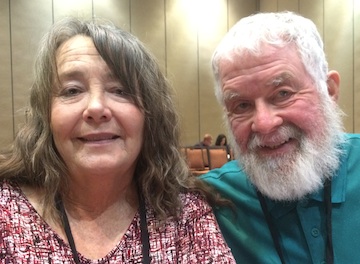 Other rural providers, such as Clark and Lynette McInroy (pictured here at Medtrade Spring 2016), owners of COPD Respiratory Services, Cheyenne, Wyoming, cover a wide rural area, and they are already having trouble taking care of patients. “We’re also worried we are going to have to cut jobs,” said Clark McInroy, RRT, who has owned the business with his wife for a dozen years. “If we can get the next phase of cuts [scheduled for July 1, 2016] on hold, that would give us time to stop it.”

The McInroys are determined to be more legislatively active in 2016, and they are sharing what they learned at Medtrade Spring with their employees. “We’re looking at new ideas and ways to serve the baby boomers and diversify,” he adds. “Unfortunately, we’re seeing our patients go back in the hospital.”

A Harsh Desert Environment
More than a decade ago, Tri-State Respiratory (doing business as Anything Medical) began operating from a modest 800-sq-ft showroom in Bullhead City, Arizona. Today, the showroom measures 20,000 square feet, making it one of the largest in the United States.

Operations manager Edric Huyke has overseen the expansion since the beginning, in the process becoming a fixture in the desert community that swells with snow birds in the winter. The 64-year-old Huyke is in charge of the retail aspect of the store, which currently accounts for the majority of all sales.

Prior to competitive bidding rural rates going into effect on Jan 1, 2016, Tri-State served a 100-mile radius, going to what Huyke calls “every single small town and nook and cranny, and even had a 280-mile round trip for six people.”

At the beginning of the year, they cut it down to 50 miles, and if phase two of rural rates hit in July 2016, he will likely cut that radius even further.

“Medicare doesn’t look at the rural areas,” says Huyke. “I’m in a harsh desert environment. I can’t service patients at these rates. When competitive bidding came out, you bid on it, and you made up the difference in volume. Well, I have no volume. When competitive bidding came out, they said, ‘Don’t worry the rural areas will receive extra,’ but that’s not the case. What happens to clients who live in an extreme environment who now can’t find a provider? They are left hanging.”

Huyke has contacted state reps and senators, but he says, “They won’t even answer my calls.” As to why he gets no response, Huyke believes the reason is that, “Basically, I’m the only one yelling. I feel betrayed by my own peers. They [in metropolitan areas] are willing to accept this competitive bidding because it’s beneficial to them, and to hell with the rest of the country.”

At the recent Medtrade Spring in Las Vegas, Huyke heard about AAHomecare’s efforts to halt phase two of rural rates on July 1, 2016. He applauds the idea, but adds, “We need to get Senators and Congressmen behind the idea, and it’s going to be a difficult task. Everyone needs to cooperate, and they are not.”

Huyke agrees that getting patients involved is necessary, and even achievable, and to those who say that there won’t be action until patients die, well, he says that has already happened. “The competitive bidding program has already killed people but they are not a statistic,” he says. “Because you have the person who was not delivered equipment, out in the middle of nowhere. He did without, and it may have contributed to his death. That is the statistic we don’t see.

“Ultimately, getting patients involved is a matter of explaining to them what is going to happen, and having them sign a petition,” Huyke continues. “If every single DME would put a petition on their store and do a walk in, and go visit every single delivery, I can tell you that we would show CMS and senators that we are organized, and that’s what they’re afraid of. Do it for yourself and for the integrity of this business.”