LAS VEGAS – Educational sessions and workshops kicked off an intense day of knowledge gathering on day one of Medtrade Spring 2018. After the New Attendee Orientation, Tom Ryan, president of AAHomecare, convened a panel (Success in the Retail Market) aimed at boosting caretail/retail sales.

Ryan encouraged attendees to share their own ideas, some of which conflicted with panelists. For example, one attendee pointed out that all her sales people earn a 5% commission on everything they sell, a strategy that has “changed our retail game and boosted sales up to 30%.” 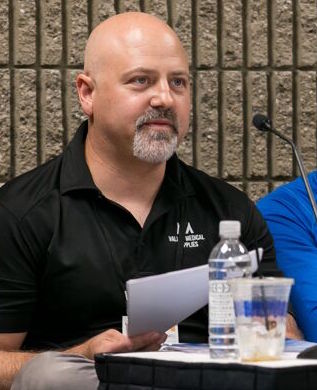 Panelist Tim Rutti (pictured), owner of Valley Medical Supplies, Phoenix, Arizona, countered that he did not want “that level of competition [among sales people] in the store,” fearing that it would lead to a lack of empathy toward customers as sales people vied for commissions. The attendee responded, “Our sales people are competitive, but our customers don’t know it. We tell them to work out those competitiveness issues like adults and it works.”

Panelist Nancy Froslie, district store operations manager, Sanford Healthcare Accessories, Fargo, North Dakota, explained that she has a Just for Women Boutique in her shop that was originally only for maternity/nursing moms and mastectomy patients. “But women love to shop, and now we sell purses, swim suits, jewelry, and crafts,” says Froslie. “The breast pumps and mastectomy items have become secondary.”

On the topic of store design, panelist R.J. Poonawala, general manager of Houston-based Spring Branch Medical Supply, revealed that he puts disposables and incontinence products on a relatively private aisle to allow shoppers some discretion when buying.

Tim Rutti: “I walked away from all billing, and I’m now 100% retail…Customers come in and go to the right side of the store, so put best sellers on the right. Compression and bath safety usually bring them in, so put those in the back…If you made a bad move and bought the wrong thing, don’t be afraid to slap a discount sticker on it. You need to devote space to items that are selling.”

R.J. Poonawala: “These days I’m focusing on the ‘better and the best’ and leaving out the ‘good’ portion of the ‘good, better, best’ philosophy. The big store down the street has plenty of the ‘good.’ I put the premium items at eye level. For example, with transport chairs, the premiums are at eye level and the ‘better’ are below where they can’t be seen as easily…Get a jump on your competitors by discovering new products at Medtrade [Oct 15-17, 2018 in Atlanta].”

Jeff Baird, JD, Brown & Fortunato: “It’s perfectly legal to incentivize employees. The law allows us to go into retail in an aggressive way…Baby boomers want the Cadillac, not the Cavalier, and they are willing to pay cash.”